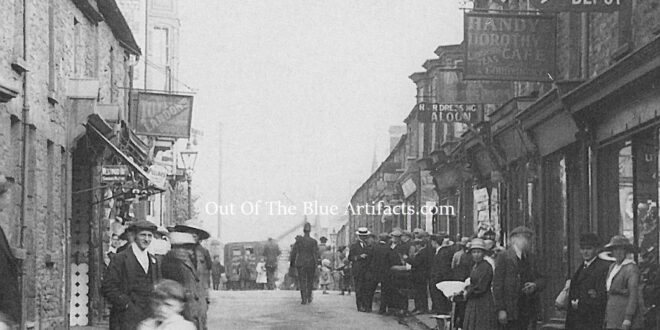 The F. W. Woolworth Stores.
The Woolworth empire was started by Mr Frank Winfield Woolworth aided by his brother Charles Sumner Woolworth in 1879. His first store at Utica, New York was started but with limited success, he relocated to Lancaster, Pennsylvania and later at Harrisburg, Reading and Scranton. These stores were called the “Five & Dime Store’s”, the 5c. and 10c. stores.

The First Store to be Opened in the United Kingdom.
.In 1909 Mr Frank Woolworth opened the first store outside North America at Church Street, Liverpool and it became the “Threepence & Sixpence Store”, the 3d. and 6d. store.

The Abertillery Store.
In 1930 the F. W. Woolworth Company informed the Abertillery District Council of their intention to build a store at Abertillery, a site at Somerset Street was chosen, this site was already occupied with about 5 old cottages (as seen to the left of the featured image above) this row of cottages were some of the oldest premises in Abertillery and were demolished to build the store.

In August 1930 plans were submitted to the council by the Woolworth Company and the surveyor made arrangements with the Woolworth Company and Mr Rosser who owned the premises next door to the proposed Woolworths Store to alter the line of their buildings in an effort to “set back” the shops to make the roadway wider. This was proposed in an effort to keep the customers safe while walking to and from the new store along the then busy main road.

On Tuesday 16th September 1930 at an Abertillery Trades and Labour Council meeting where the subject of the new Woolworth Store was on the agenda and it was stated that the council had told the Woolworth Company that they insisted that they build the new store a few feet back as to widen the road in that area. A great deal of correspondence had passed between the two parties and the council could not hold up the building any longer than a month without involving themselves in thousands of pounds of compensation. The council were frustrated, though had to concede, as they had no power to compel the company to set the building back, therefore the original planning of the building went ahead and the road was left narrow at that point. 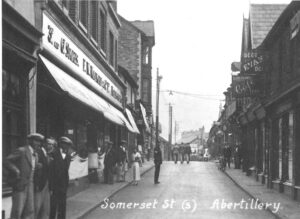 The Opening of the Store.
In April 1931 the Messrs F. W. Woolworth Co finally built a store at 39-47 Somerset Street Abertillery (as seen left) it was a late addition to such a large town but the depression in the area delayed its construction by many years. The store was opened on Friday 24th April for inspection only.

The Official Opening of the Store.
On Saturday 25th April 1931 the store at Abertillery was officially opened for business. The premises occupied the ground floor of 45,000 square feet with approximately 500 square feet of counter space. It was reported that all staff with the exception of the manager were all appointed locally. The firm also took a keen interest in the employees and provided a rest room and dining room. The residential manager was Mr A. Smith. 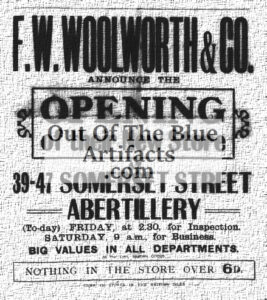 At the time of the opening of their Abertillery store it was reported that it was one of 450 branches of Messrs F. W. Woolworth’s Stores in Great Britain.

The Move Across Town.
In September 1965 Messrs F. W. Woolworth announced they were to move their premises from Somerset Street to a place newly vacated on High Street by the demolition of Messrs Simons furniture store at Bristol House, High Street below Coed Iorwg and put their old store up for sale at £22,000.

Soon after the closure, Iceland Frozen Food’s Store purchased the old Woolworth’s building and have occupied it since. The old company of Woolworth’s and the new Iceland Store had trouble with getting supplies and deliveries into the building owing to the tight access into the site at the top side of the building, though in 2015 the Multi Storey Car Park was rebuilt and reconstructed back a few feet to make the delivery bay more accessible.