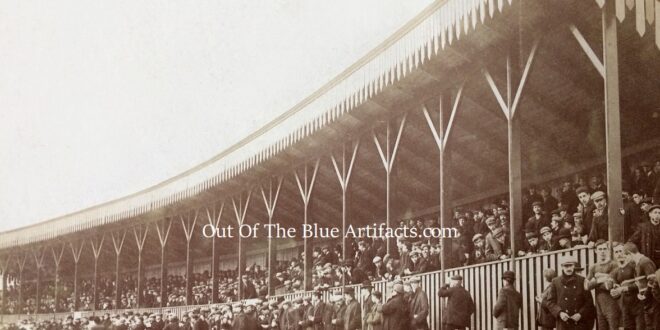 The Football Grandstand – Abertillery.
On Monday 12th November 1906 at an Abertillery District Council meeting held at the offices at King Street, Abertillery, it was proposed to have a grandstand erected. The work on its construction was to be paid for by the Abertillery Football Club. The club had asked for permission to have one erected and Mr Harris and Mr Stewart passed their application. Work was to begin as soon as possible.

The new football grandstand was to be paid for by the Abertillery Rugby Club, though there were many objections to this by a few councillors as to the hold the club would have on its use. An agreement was reached and the council made sure the football team would not have sole use of the playing fields and that the grandstand would also be used by other sports teams spectators and the general public.

The Construction of the Grandstand.
I cannot find an exact date the Abertillery Grandstand was constructed or even the contractor that built it. Though it seems to have been built sometime between November 1906 and February 1907.

The main featured image shows the grandstand not long after its construction, circa 1908-1910.

The photograph in the main featured image was kindly supplied courtesy of Mr David Skidmore.

In February 1907 Abertillery played Tredegar at the Park, Abertillery. After this match a photograph was taken of the home team in front of their new grandstand. This photograph, described as being 2′ foot by 2′ foot 6″ inches in size, mounted on a stretcher of black sateen draped with Amber 4′ feet x 3′ feet was later exhibited at the Bon Marche Shop, Abertillery. It was stated that the black and amber (as seen in the advertisement above) were the Abertillery team colours at that time. 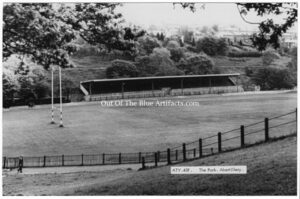 On Tuesday 1st October 1963 the new grandstand at the park was officially opened. The opening ceremony was conducted by Mr Ewart Davies president of the Welsh Rugby Union. Among others who attended were – Councillor J. J. Owen, J.P., Chairman of the Abertillery Council and Mr Ron Jones, Chairman of the Rugby Club.