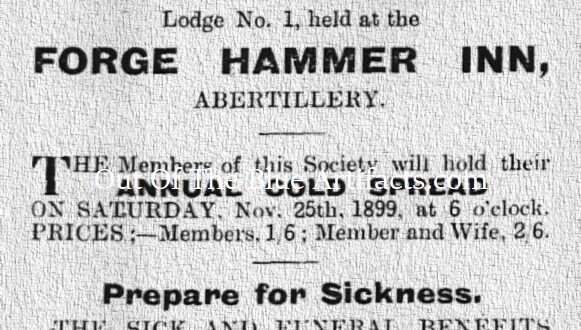 The Forge Hammer Inn – Abertillery.
The Forge Hammer Inn was situated on Hill Street, Abertillery. The inn was owned by Mr William Webb, of Aberbeeg Brewery. The early censuses shows it was between Middleton’s Row and Lewis James Houses, close to the Western Valley Terrace and Castle Street although since then the street names have been altered. The 1891 census stated the then landlord lived at No.17 Hill Street, Abertillery.

In 1870 Mr William Edwards transferred the license of the Forge Hammer Inn over to Mr John Tarrant.

Mr Morgan Price.
In the early 1880’s Mr Morgan Price was licensee. Apart from the licence transfer notice in the local papers there is no other information on Mr Price.

Mr Ralph Wilson.
In 1883 Mr Ralph Wilson was licensee. Apart from the licence transfer notice and a court case brought about in February 1884 by Mr Wilson in which he was assaulted at his beer-house as reported in the local papers, there is no other information on Mr Wilson.

Mr and Mrs Moses and Mary Adams.
In 1884 Mr and Mrs Adams became licensees at the Forge Hammer Inn, Abertillery. Mr Moses Adams senior was a colliery contractor and licensee, they lived at the inn with their children – Moses Adams junior, Lewis Adams, Edwin Adams and Bertie Adams. Mrs Mary Adams nee Lewis left her husband in 1891 after a well publicised court case and Mr Adams later moved from the inn to reside at Castle Street, Abertillery.

The Proposed Closure of the Forge Hammer Inn.
In the late 1890’s Messrs Webb’s of Aberbeeg were the owners of the Forge Hammer Inn and many other pubs in the district, they wanted to add another licenced premises to their stock and proposed to have a new hotel built on the new Alexandra Road, the main road from Abertillery to Six Bells. This hotel was to be called the Cwm Hotel, built on land owned by the Cwm Estate. When applying for planning permission the magistrates were not impressed with the monopoly they had in the industry within such a small area and issued them with an ultimatum.

The Webb Brothers had to close two of their old premises close by and forfeit those licenses in order to build a new hotel. They abided by the magistrates wishes and offered to surrender the licenses of the Forge Hammer Inn and of the Ivorites Inn on Castle Street. While the new building went ahead and the closure of the other two inns was put in motion Mr William Tippins was put in place as landlord in order to oversee the undertaking. 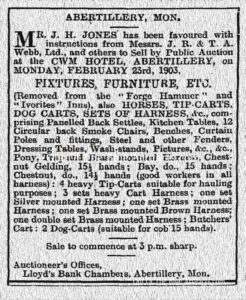 The Licence Surrender at Forge Hammer Inn.
In November 1902 Mr William Tippins with the backing of Messrs Webb’s, Aberbeeg stated his intention to surrender the current licence at the Forge Hammer Inn and to re-apply for a new licence at the Cwm Hotel, Alexandra Road, Abertillery. This application coincided with the Ivorites Inn licence surrender and re-application to the same new hotel.

The Auction.
On Monday 23rd February 1903 Mr J. H. Jones was instructed by Messrs J. R. & T. A. Webb, Ltd of Aberbeeg to auction off fixings and furniture both the Forge Hammer and the Ivorites Inn, Abertillery. The auction was held at the new Cwm Hotel, Alexandra Road, Abertillery.