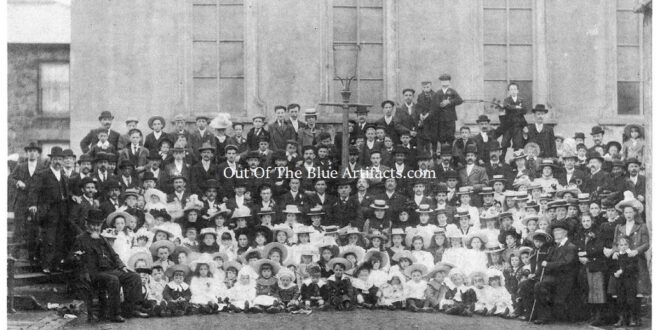 The Gobaith Calvinistic Methodist Church – Blaina.
The Welsh Evangelists Howell Harris and Daniel Rowlands worked together to push Welsh Calvinism in Monmouthshire, though they both parted company and Howell Harris established a society at Gelli Crug, Cwmtillery, Abertillery, though it didn’t take off and soon became non-existent. Later the general conditions in the locality at that time was reported as being distressing.

The Religious Cause.
During the 1830’s agriculture gave way to industry and hundreds of strangers came to this district from all parts of England and many moved here from other parts of Wales looking for work, among them were many connected to the Welsh Calvinistic revival many whom had the benefit of Sunday School training. They found the religious conditions in the district intolerable and commenced to promote their religious activities. Among the early pioneers were – Mr Evan Job of Risca; Mr Thomas Jones of Llandebie, Carmarthenshire; Mr John Richards of Tregaron and Mr Gruffydd Dafydd:

These men were determined to establish the church and in 1835 they went to the newly formed Salem at Nantyglo for assistance. Surprisingly the Salem leaders promised their help and went to Blaina to assist in the formation of their new cause and the construction of their eldest daughter church.

The names of some of these gentlemen who came to help in the new formation at Blaina were – Mr Evan Lloyd; Mr John Davies; Mr Thomas Howells; Mr Ebenezer Evans; Mr John Daniels; Mr David Williams; Mr David Edwards and Mr Thomas Evans: The last two named became ordained ministers of the connexion. The first step was to hold weekly society meetings in the various members cottages. A Sunday School was organised and was also held in one of the cottages.

One of these cottages was that of Mr Shon Roberts of Whinberry Row, Blaina. It was situated high on the mountains and was hard to get to and from. Meetings were also held at the cottage of Mr Gruffydd Daffydd, his home was situated where the Blaina Council Offices were later built. Also at the home of Mr David Thomas at Lamb Row, West Side, Blaina.

Over 35 people were banded together in this cause though their meeting places were scattered as there were no single accommodation for all the worshippers. A short while later the Welsh Calvinistic Methodist movement created a chapel under that denomination at a place known as the “Bumble Hole” in Cwmcelyn, it was reported as being a beautiful spot surrounded by green fields.

The First Church.
In 1837 the first Gobaith Church, (Hope in Welsh) at Bumble Hole, Cwmcelyn was built at a cost of £500 though just a short while later the numerous coal pits and levels that rapidly built up in that area caused subsidence which caused irreparable damage to the building, when only £100 had been paid of the debt the church was rendered unfit for purpose and had to be abandoned.

Again the Salem Baptist Church came to their aid, just previously the Salem worshippers moved from their old building to their new church at High Street Blaina and they offered the Calvinistic Methodists the use of their old premises until they can get a new church erected.

The New Gobaith Church.
Later the Gobaith Calvinistic Methodist Church was constructed lower down towards the town, sited on the top end of the street which was later called Hope Street, which took its name from the church, it was built with all of the materials taken from the old church at Bumble Hole. Most of the building, ground work and the moving of the materials to the site was done by the worshippers, many of whom were miners working long hours in the collieries. The new Gobaith Church cost £500 which together with the deficit of £400 on the old church totalled £900 though over the following years the church prospered.

The Cholera Epidemic.
In 1849 cholera ravaged the area and many of the worshippers succumbed to the disease. During the epidemic there was continual day and night prayer meetings which swelled the membership. 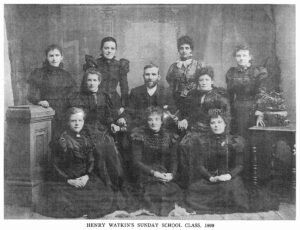 In 1862 there was a major change to its architecture the new edifice had to be extended and the general shape altered. Gas was installed to replace the oil lamps and the entrances moved. This work brought the total debt to the sum of £1,350 equivalent to £152,550,00p in today’s money. At this time that sum of money was a colossal amount, though over the next thirty years the church made a tremendous effort to clear what they owed and it wasn’t until 1893 that the debt was finally cleared. It was stated that its daughter church was the Ebenezer at West Side, Blaina. 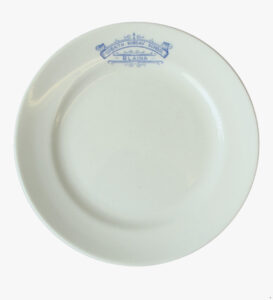 In 1867 the financial situation in the valley took a turn for the worse. The iron works and many of the collieries completely closed down. An exodus of church members followed, many families moved to neighbouring valley’s, others to the north of England and some even to America. The situation remained dire until Messrs John Lancaster took control of the collieries in 1878 and once again the workers flowed back and church membership numbers rose.

The Sunday School Plate (as seen right) this plate which is 6″ inches in diameter was issued as a part of a set containing a cup, saucer, a 6″ inch plate as featured and a slightly larger dinner plate. I only have this 6″ inch plate in my collection. 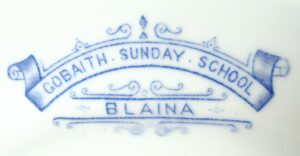 The transfer image (as seen left) on the Crockery Set.

Rev W. T. Davies.
In 1926 the pastor was Rev W. T. Davies from Treorchy. Rev Davies’ term was overshadowed by the depression, many of the collieries had closed and again the area was in a bad financial situation with much unemployment. To add to their problems the roof of the church was lifted off in a hurricane that hit Blaina.

Rev Thomas James.
Another minister who had a connection with the church, though not officially a pastor was Rev Thomas James of Blaina. Rev James made a success of the Sunday School and helped promote the weekly meetings. 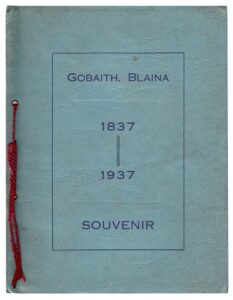 The Church Centenary 1937.
On Sunday 10th October 1937 the Gobaith held its centenary. The services were held throughout the week. A special souvenir booklet was issued (as seen right) for the occasion.

Notes of interest.
The church was called Gobaith, meaning “Hope” in the Welsh language. It was also known as the Hope Chapel. Hope Street upon where it was situated took its name from the church.

Dioconate.
The deacons who were ordained and the years of their election.
1837.
Mr Thomas Jones; Mr Evan Job and Mr William Rowlands:

The Dioconate.
There were many deacons over the years, one of the deacons in 1850 was Mr Edward Jones, Post Master of Abertillery. Mr Jones was the father of Alderman S. N. Jones and great-uncle (through marriage) of Mr Charles Evan Hughes. Mr Charles Evan Hughes, born in the U.S.A. became a lawyer, statesman and politician. On the 6th November 1906 he defeated Mr William Randolph Hearst to become the Governor of New York. In 1916 Mr Hughes also ran against Mr Woodrow Wilson in the U.S.A. presidential elections, being defeated on this occasion by the more experienced candidate.

More information on Mr Charles Evan Hughes and his ancestors connected with the Trinity Chapel Abertillery.

Another feature was that in many cases sons and grandsons had succeeded their forebears as officers of the church. Mr William Evans was succeeded in the dioconate by two sons Mr Azaria and Mr David Evans. Another son became a leader at the daughter church the Ebenezer, West Side, Blaina and one other son Mr Thomas Evans became the secretary of the Gobaith Church, Blaina.

In the secretaryship, Mr Thomas Jones, one of the founding members was succeeded by his grandson Mr Thomas Davies a painter, Blaina. In another case two great grandfathers one on each side, a father and grandson had succeeded each other, these were Mr John Richards (Founder member), David Rees, David Richards, David Thomas and David John Thomas. Other members of the Diaconate were – Mr Benjamin Griffiths; Mr John Griffiths; Mr George Fox and Mr David William Fox, fathers and sons: