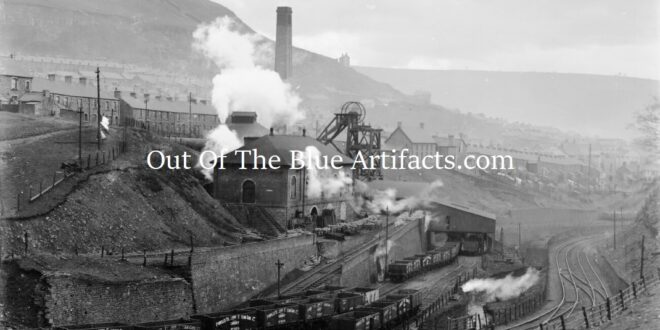 The Gray Colliery – A Brief History

The Sinking of the Gray and the Vivian Collieries 1889.
The Vivian Colliery at Six Bells and the Gray Colliery at Abertillery were sunk at the same time under the directorship of the owners Powell’s Tillery Steam Coal Company. Tenders were invited for the sinking in January 1889.

The Cutting of the Sod Ceremony.
On Tuesday 19th February 1889, the ceremony of “Cutting the Sod” took place at both collieries. At 10.00am a special train with several spacious saloon carriages was laid on for the dignitaries which travelled from Cardiff to Newport and then shunted through Newport up the western valley to Abertillery Railway Station. The dignitaries then made their way to town and gathered at the site of the proposed Gray Colliery. The group chosen to cut the sod of the new collieries were led by Mr John Hacquoil the Cardiff agent for the Powell’s Tillery Company on behalf of Mr T. W. Powell who regretted not being there as he was in Australia, also present were Mr Dawson the company manager and Mr E. C. P. Hull a director of the company who accompanied the ladies in the party.

The Placing of the Gold Nuggets.
A brief address was given by Mr Dawson and the honour of cutting the first sod was given to Miss Hacquoil, Mr Hacquoil, Miss Alice Hacquoil, Miss Dawson, Mr Dawson and Mr Hull cut the others on that site. The group later submitted themselves and posed for many photographs. They the proceeded to the Vivian Colliery at Six Bells where the same procedure went through. The cutting of that sod on the marked out area was given to the ladies again. Afterwards the Rev Mr Walters added a few words of congratulations and formally named the two collieries the “The Vivian and the Gray”….. During the cutting of the sod ceremony, pieces of gold was placed in the holes from were the sod came out, this was done as a gift to the pit sinking crews.

The Sinking Contractors.
The sinking of the collieries were in the capable hands of Mr F. Coulson (Durham) and the head sinker Mr Joseph Briggs.

The party went back into town to the Tillery Reading Rooms, Abertillery for lunch, then made their way back to Cardiff.

Mr John Burgess.
On May 16th 1891 the Vivian and Gray sinkers held a testimonial in the Railway Inn for Mr John Burgess the organiser for the fund for the widows and children of the sinkers who had lost their lives in the tragedy of Dec 1890 during the sinking of the Vivian Pit. The sinkers who presented the gift to Mr John Burgess were – Joseph Briggs the head sinker, Johnson Briggs, Thomas Carney, Matthew Clarke and James Powell. (More information to come)

The Early Workforce.
Below are some of the men who were listed as working at the Gray Colliery in the early years.
Mr Andrew Hailstones from Scotland came to Abertillery to help sink the Gray Colliery, he stayed in the valley and worked as the colliery winder man.

Mr Albert Edwin Holbrook.
Mr Albert Edwin Holbrook was from Somerset and in his youth became an engineer and was engaged on the building of the Severn Railway Bridge in the 1870’s in which he did all his work from a diving-bell. He later worked on erecting Cleopatra’s Needle on the Thames Embankment. At one time a pleasure steamer sank on the River Thames and he was the diver employed on the salvage work.

In the late 1870’s early 1880’s, Mr Holbrook then went on to work on driving the Severn Tunnel. In later years he showed great knowledge in the South Wales Coalfield and became one of the top pit contractors in the Western Valley’s. He lived in Cromwell Street, Abertillery and was engaged in sinking operations in many of the local pits, he deepened the Rose Heyworth Colliery to the deeper seams and drove the connection tunnel from the Gray Colliery to the Vivian Colliery for ventilation purposes.

Mr Albert Edwin Holbrook was a founding member – number 57 of the Liberal and Labour Club, Abertillery.

Master Lewis John.
It was stated in the South Wales Gazette Friday 18th March 1955 that Mr Lewis John of 71 Princess Street, Abertillery was the first boy to work down the Gray Colliery. Mr John was born in 1884.

Coal Production at the Gray Colliery.
After the sinking of the Gray Colliery began in 1889 the actual opening took some time, slightly delayed, the first coal was wound in the early 1890’s.

The Powell’s Tillery Steam Coal Company Ltd had a share capital of £144,006 and a debenture issue of £65,200, The collieries output was about 900,000 tons annually, total value was over half a million sterling. The Powell’s Tillery Company directors were – Col H. A. Powell; Messrs E. Heseltine; William Newall; W. J. Roch; and William Stewart (Managing Director); would retire. The Ebbw Vale Co were to take over the management of these collieries.

In 1923 a new ventilation fan was installed at the Gray Colliery to improve the ventilation.

In August 1929 a new drift was driven from the Gray Colliery to aid in ventilation.

Throughout its short history the Gray Colliery, Abertillery was closed and re-opened many times, partly due to lack of trade and other problems such as losing the coal seams and other difficulties. The colliery stopped producing coal sometime in the 1930’s and became a mines training facility. The colliery headgear remained long after it closed and later the whole area was covered over with waste during the valley landfill scheme in the early 1970’s.

The Later Years.
The Abertillery Comprehensive School now occupies the colliery site and the old shaft is directly beneath the school’s tennis courts.