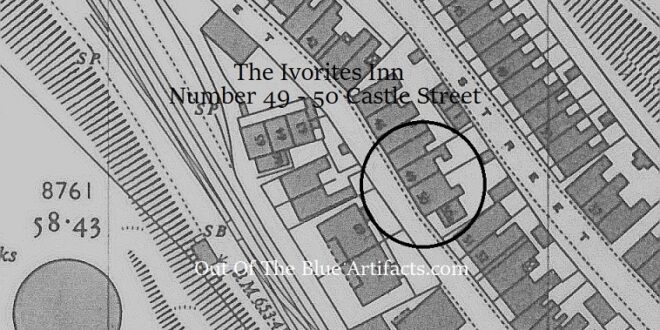 Street Name Changes.
Prior to 1881 Castle Street was where Hill Street is today, in later reports after the street name changes, Railway Parade officially became known as Castle Street and houses were erected along the southern end of the road, taking in the building that was was thought to be the Ivorites Inn in early reports. 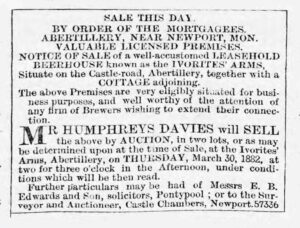 The Sale of the Ivorites Arms 1882.
In March 1882 the Ivorites Inn was sold at auction (as seen left) it was described as a beerhouse, having a cottage attached and being on Castle Road, Abertillery.

Much later it was reported to have been situated in 2 attached houses numbered 49 and 50 Castle Street, Abertillery (its position can be seen circled in Black on a later map featured above). The houses on the street must have been renumbered. This public house was mistaken (until now) with the Ivorites Arms at Aberbeeg.

In November 1888 an urinal was constructed at the premises. 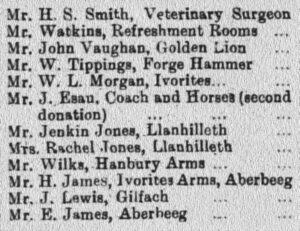 The Closure Proposal.
The Webb Brothers, who were the owners of many pubs and inns in the area also owned the nearby Forge Hammer Inn on King Street and the Golden Lion on Castle Street, Abertillery.

In the late 1890’s Webb’s Brewers wanted to have a new hotel built on the northern end of the proposed new Alexandra Road, Abertillery called the Cwm Hotel named after the Cwm Estate who owned the land it was to be constructed on. The licensing authorities would only grant the licence for the proposed new hotel on a condition that the Webb’s Brewers would transfer the Forge Hammer licence to the new hotel then close the said inn and also close the Ivorites Inn. This condition was to stop the Webb’s Brewers having a monopoly on the trade in such a small area.

The brewers decided to comply with the condition placed upon the granting of a licence and transferred the The Forge Hammer licence to the new hotel and they planned to close the Ivorites Inn. In 1900 the new hotel (Cwm Hotel) was under construction.

The Sale of the Both Inn’s Fitments. 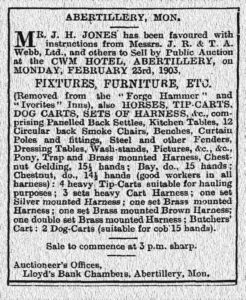 On Monday 23rd February 1903 the premises, fittings and furniture of both the Ivorites Inn and the Forge Hammer Inn was auctioned off (as seen right) at the newly constructed Cwm Hotel, Abertillery.

Some of the effects to be auctioned from the both inns were 3 horses, horse, dog and tip carts, harnesses, settles, kitchen tables, benches, chairs, dressing tables and wash stands etc.

The Sale of the Ivorites Inn.
On Monday 17th July 1911 the two houses No49 and No50 which was previously known as the Ivorites Inn were put up for auction (as seen on the actual auction notice below) at the Bush Hotel, Abertillery. 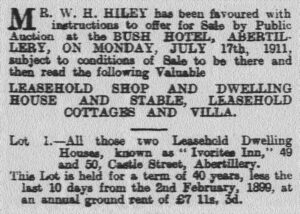