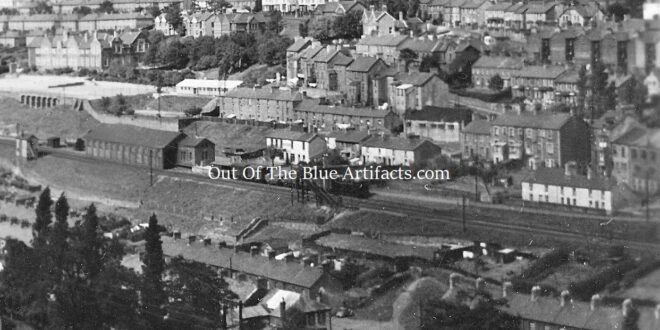 The Kings Head Inn.
The Kings Head Inn (as seen centre in the main featured image) appeared, as an inn in the late 1860’s early 1870’s. There were a couple of buildings occupying that area on the 1840 maps though no sign of any public house or inn on the map, or on any early censuses though all that area was known as the Kings Head.

The Kings Head Inn, cottages and adjoining land, were the property of the family of Mr Daniel Lewis and his wife Mrs Harriet Lewis, land proprietors, originally of Clynmawr Canol (Grosvenor Nursing Home, now renamed Penybont Nursing Home) later of Neuadd House, Abertillery. There was a Mr Daniel Lewis with connections to the Royal Oak Inn during the 1850’s. I am not sure if he had any connection with the said Lewis family of Clynmawr? Mrs Lewis later widowed, is featured No.11 on the register (as seen left from 1885). Mrs Lewis later leased the Kings Head Inn to Messrs Webb Bros & Co, Aberbeeg and she featured on application forms when Webb’s and the tenants of the Kings Head Inn wanted to apply for various alcohol licenses.

The Kings Head Inn was part of a group of cottages that was built on a prime location, at that time, by the side of the main railway line from Newport to Nantyglo.

Mrs Eliza Deborah Gould.
In the mid 1870’s Mrs Elizabeth (Eliza) Deborah Gould nee Lewis was landlady of the Kings Head Inn. The wife of Mr Joseph Gould of Midsomer Norton, Somerset. Mrs Elizabeth (Eliza) Deborah Lewis, born in 1833 at Ware, Somerset, was the daughter of Edward and Ruth Lewis originally from Clutton, Somerset, Mr Lewis was a Blacksmith. It was said that Miss Eliza Gould nee Lewis was born in the Carpenters Arms at Stone Allerton, Somerset in 1833. The families met and moved to Cwmtillery in the late 1840’s early 1850’s.

In about 1850 Miss Eliza Lewis married Mr Joseph Gould, born 1826, a coal miner, son of John and Hannah Gould of Midsomer Norton, Somerset. In Mrs Eliza Gould’s obituary it stated they were married on the day the first train ran from Newport to Nantyglo! In the 1850’s Joseph and Eliza were living at Cwmtillery with their daughter Miss Ann Gould born 1851. At this time they were living with her parents. Eliza’s father, Mr Edward Lewis was listed as a Blacksmith and was later reportedly being the founder of the Oddfellows Lodge at Abertillery.

In the mid 1870s Mrs Eliza Deborah Gould came to Abertillery and became the new landlady of the Kings Head Inn. Mrs Gould, born 1833 at Ware, Somerset was listed on the 1881 census as bilingual, a Welsh and English speaker. She was living at the inn as innkeeper with three of her children – Master Edward John Gould, Miss Elizabeth Gould and Master Tom Gould, born 1875 at Abertillery. There was another daughter by the name of Harriet, reports stated she had twelve children with her husband Joseph Gould.

Mrs Jane Morgan.
In 1907 Mrs Jane Morgan nee Tippins became the landlady of the Kings Head Inn. Mrs Morgan was recently widowed, she had been married to Mr William Lewis Morgan who had sadly died in February 1907. Mrs Morgan was living at the Kings Head Inn with her family – Miss Sarah Jane Morgan, her niece, born 1894 at Abertillery, working as a bar maid. Miss Mabel Morgan, her niece, born 1902 at Abertillery and Miss Jane Walters, a servant girl. Mrs Morgan’s mother, Mrs Ann Tippins was also resident at the inn, Mrs Tippins was born in 1847 at Llangynyder, listed as a widow. Mr Jonathan Tippins had been living at No7 Kings Head Rows, he was involved in a fatal accident at Cwmtillery Colliery in January 1904. 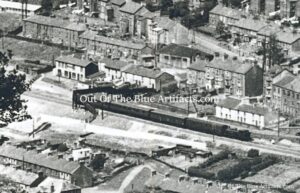 The Proposed new Kings Head Inn at Oak Street.
In February 1909, at the Bedwellty Petty Sessional Brewster Sessions held at the Abertillery Police Courts, Mr J. Sankey of Cardiff, instructed by Mr Le Brasseur of Newport applied on behalf of Mr Jane Morgan, landlady and Messrs Webb of Aberbeeg the owners of the Kings Head Inn, for the removal of the present license to a new hotel to be built just 70 yards away at Oak Street, Abertillery.

It was reported in the South Wales Gazette that the population in a quarter of a mile radius around the Kings Head Inn was 6,500, there were only 2 beer houses and one fully licensed house, there was a population of 2,600 nearer the proposed new hotel in Oak Street than any other licensed house. It was also stated that the consumption of beer for the Kings Head was 275 barrels per year. It was told of how Mr Jane Morgan had considerable experience in the trade and had never been in trouble with the police. Those in favour of a larger premises, stated that on rugby match days at the Abertillery Park, many spectators would stop at the Kings Head Inn for a drink or two, you were expected to wait up to over 10 minutes to get served with a pint of beer. A new premises with enlarged accommodation was desperately needed.

The main objections were from the residents of Oak Street and the Free Church Council, one main problem was that it was to be situated on the main road leading to the Abertillery Intermediate School. The application was held over for twelve months pending amendments. Inspector H. Lewis stated in his annual report that in this part of the district there was a population of 30,431, Alehouses totalled 40, beer-houses totalled 29 (on) with 3 (off) along with 4 licensed grocers, making a total of 76 licensed premises.

In March 1910 the solicitor working on behalf of Messrs Webb was instructed to submit the amended plans of the proposed new hotel, it was stated that it was to be built 70 yards away, south of its current position, it was to have its main entrance on a low level road so not to cause problems for the residents living close by. After hearing many witnesses in favour of the new hotel the magistrates still refused the application.

On the 1911 census Mrs Eliza Deborah Gould was living at No115 Oak Street with her daughter Mrs Elizabeth (Lily) Williams nee Gould, a widow listed as being a confectioner.

The Death of Mrs Eliza D. Gould.
In February 1919 Mrs Eliza Deborah Gould sadly passed away at 86 years of age. Mrs Gould was buried at the Parish Church, Llanhilleth. 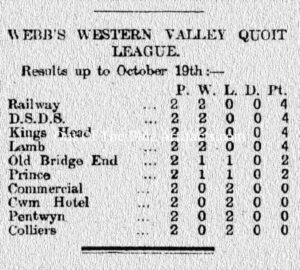 Quoit League.
In the 1920’s the Kings Head Inn was in the Webb’s Western Valley Quoit League. They played other local teams such as – The Railway, the D.S.D.S. Club, (Demobbed Soldiers & Sailors Club) on Mitre Street, a forerunner to the British Legion Club. The Lamb, The Old Bridge End, The Prince of Wales, the Fountain Inn, Commercial, The Cwm Hotel, Pentwyn and The Colliers.

The Closure of the Kings Head Inn.
The Kings Head Inn closed on New Years Eve, 31st December 1963, the last landlord was Mr Thomas Hathaway. The building still exists and is now a business premises. The adjoining Kings Head Terraces and Cottages have since been demolished.