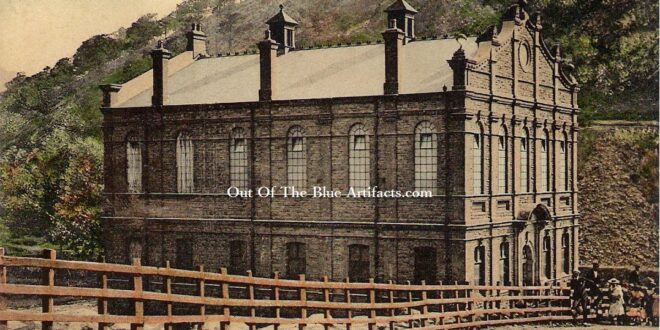 The Llanhilleth Institute History.
In 1897 Mr Edward Jones (Colliery Company Partner) had previously been approached on establishing an institute or reading library at Llanhilleth, Mr Jones initially provided a small building as a library reading room and a room for billiards, he promised that if an institute was constructed in the area, his colliery company would contribute toward such a building.

Mr Bowen.
As the population of Llanhilleth grew, it was found necessary to procure a larger premises and a place was then rented from Mr Bowen of Llanhilleth, this consisted of a reading room, billiards room and a recreational room for games etc.

Later Mr Edward Jones was again approached on the matter of having a proper purpose-built institute erected and he again renewed his promise to which he had made previously that the colliery company would contribute as much to the cost of the building as the men. Though sadly before any proper arrangements could be made Mr Edward Jones sadly passed away and the scheme fell through. Though after a short while the colliery company took the matter up independently of the late Mr Jones and gave the promoters a gift of £1,000. The idea of an institute was carried on and was successful.

The Laying of the Memorial Stones.
On Saturday 15th of October 1904, the ceremony of the laying of the Memorial Stones took place at the Llanhilleth Miners Institute. At the meeting on the site, the workmen of Llanhilleth were firstly congratulated upon the success of their efforts and the foresight of the late Mr Edward Jones (Colliery Company Partner) to provide an institute for the district. The building with which considerable progress had been made is to be erected at an approximate cost of £7,000 according to the plans of the architect Mr Dan Lloyd, Llanhilleth.

The procession paraded the streets headed by the Llanhilleth Brass Band who were under the leadership of Mr J. Hancock. Mr Thos Jones the under-manager and chairman of the buildings committee presided over the large attendance of spectators. Mr Jones was presented with a silver trowel and a mallet, suitably inscribed by Mr D. Lewis the contractor, for which he expressed his thanks. The chairman told how the late Mr Edward Jones of Snatchwood, Pontypool, a partner in the colliery company had taken a great deal of interest in the movement and who first put the desire in the hearts of the people of Llanhilleth to embark on such an undertaking.

The first stone was put down by Mr Thomas Jones (the Chairman on behalf of the late Mr Edward Jones). The Stone Layers – Mr F. A Smith (Secretary of the Colliery Company) on behalf of Partridge Jones & Co. He said he had great pleasure in the honour of laying a stone and that the desire of the company was to do everything they could for the happiness of those who were dependent on them and that the collieries were developed over the past twelve years and they had spent a great deal of money on them. He presented the committee with a cheque for £1,000. Mr Clarke Jones (one of the Company’s Directors); Mr Richard Partridge (one of the Company’s Directors); Mr Percy Jones (one of the Company’s Directors); Mr Nicholas Smith (Chairman of the Workmen’s Committee); Mr D. Lewis (The Builder); Mr Edward Colborne (of Messrs Colborne & Co, Solicitors); Dr Frost (Colliery Doctor for Messrs Partidge Jones & Co); Mr W. H. Routledge (Agent); Mr W. Davies M.E. (Manager); Mr J. E. Wood; Mr Thomas Phillips (of Maesycnew Farm); Mr George Farber (on behalf of the Llanhilleth branch of the Rational Friendly Society); Rev D. Felix (Rector of Llanhilleth); Mr T. Phillips (on behalf of Mr Harry Lewis); Mr George Holford (on behalf of the Llanhilleth branch of the Co-operative Society); Mr C. B. Cook (on behalf of Mr J. Yendoll); Mr D. Lloyd (Architect) and Messrs M. Gorman and Mr J. Rowlands (on behalf of the public)

The chairman spoke and wished to acknowledge the kindness of Mr H. P. D. Phillips, who had given the site for the institute to be built along with many other speeches of acknowledgement from the other guests. A luncheon was later provided in the Assembly Room of the Llanhilleth Hotel. After all the speeches took place Mr Nicholas Smith toasted the contractor Mr David Lewis, Aberbeeg and the architect Mr Dan Lloyd M.E. Llanhilleth.

Opening Ceremony.
On Wednesday 12th of September 1906, the Llanhilleth Miners Institute was officially opened. After a large crowd had assembled around the main entrance Mr Dan Lloyd the architect handed the keys to the doors to the President Mr T. W. Jones, apologising for the absence of the builder. He stated the opening had been delayed by the recent miners’ strike at the Llanhilleth Collieries which had lasted nearly twelve months. After a few more words from Mr Jones the doors were officially opened. Once inside the hall the music was provided by the Hafodyrynys Brass Band.

The committee of the Llanhilleth Mixed Choir made the institute a present of a handsome piano which was placed on the stage in full view of the audience. Later more speeches followed from Mr John Rees (Chairman of the Works Committee); Mr William Morgan (Chairman of the Choir Committee) and Councillor Mr Gorman. Music was provided by – Messrs Edgar Morris; Mr T. Vaughan; Miss R. Thomas and the Crumlin Juvenile Choir under the leadership of Mr Arthur Phillips.

Description of the Building.
The Llanhilleth Miners Institute was built at a cost of £7,000 to plans prepared by Mr Dan Lloyd (Architect and M.E. of Llanhilleth) and erected by Mr David Lewis (Builder of Aberbeeg). The building was sized 100′ x 52′ feet it is of Romanesque architecture and built of blue native stone with red brick and terracotta relief. The portico is of goulting stone.

A swimming bath was on the ground floor, measuring 16′ feet x 18′ feet, which was lined throughout with white glazed bricks. The gymnasium was provided, measuring 40′ feet x 16′ feet with heating apparatus which also heated the public hall and other rooms.

On the second floor was an entrance hall which gave admission to the committee room and secretary’s room, both of which were 15′ feet x 12′ feet and a billiards room 45′ feet x 18′ feet, containing 2 billiard tables. The room to be used as a reading room and library was 32′ feet x 20′ feet and the public hall measured 70′ feet x 47′ feet and accommodated 900 persons, at the end of the hall was a stage 18′ feet deep. The whole building was lighted by electricity and warmed by the hot water low pressure system, the apparatus having been provided and fixed by Messrs Alger & Sons of Newport.

A caretaker’s apartments were also provided and consisted of accommodation rooms, lavatories and conveniences. At the time of opening the institute was without a caretaker but one was to be selected by means of a ballot which was held on the 17th of September 1906. The management was to be in the hands of a committee of twenty-four, of which Mr Theophilus Jones, Llanhilleth Colliery manager was (President); Mr John Rowlands (Vice-President); Mr C. B. Cook (Secretary) and Mr David Davies (Treasurer).

The Contractor and Architect.
The contractor was Mr David Lewis of Aberbeeg. The architect was Mr Dan Lloyd M.E. of Llanhilleth.

Mr David Lewis – Contractor.
Mr David Lewis was born in 1871. Mr Lewis’ father was the landlord of the Hanbury Hotel and the Union Inn, he also had the Ivorites Arms at Aberbeeg and lived at the Rose Cottage. Mr David Lewis later built the new Hanbury Hotel and the Llanhilleth Hotel, he had workshops in Hafodarthan Road and later converted the old Mill close to Glandwr Baptists Chapel. He constructed the Llanhilleth Playhouse and many other buildings in the area. He lived in “Brynawel” Aberbeeg and was married to the daughter of the Lewis’s of Gilfach Farm.

The Caretakers Post.
On Monday 17th of September 1906, a ballot for the position of caretaker took place at the Llanhilleth Colliery pit head and out of 20 applicants Mr Stanley Smith was top of the list with 471 votes, next three applicants were as follows – Mr Nicholas Smith 189; Mr R. Richards 131; Mr G. Lloyd 109; The committee declared the vote void and were determined to make their own selection? (Information to come).

The Institute Clock.
In August 1907 a clock was placed on the front of the institute, given by Messrs Jones of the Partridge Jones & Co. It was the first public clock erected at Llanhilleth.