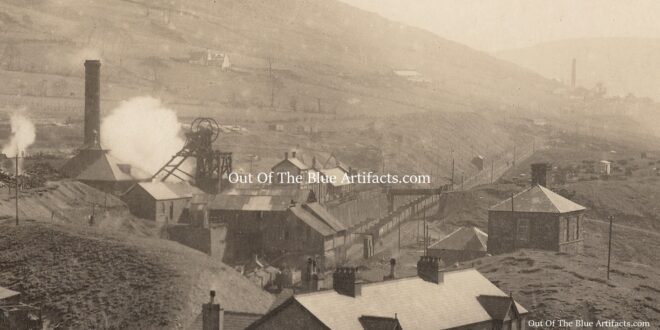 The Lower Deep Colliery.
Originally one of two collieries situated close to Cwmcelyn, Blaina, the other being the Upper Deep Colliery both owned by the Nantyglo Iron and Coal Company.

The New Company was formed to acquire the Iron Works of Nantyglo, Beaufort, Blaina, Cwm Celyn and Trostre Works and to amalgamate the whole under one company.

It was reported that the Nantyglo Iron Works was purchased for £480,000 and the Blaina Iron Works for £200,000. The works were carried on with many workers being employed, though in 1873 the Great Strike put many men out of work, the shareholders became dissatisfied with the administration and a new board of directors of Mr Hugh Mason and Mr Richard Shaw. Mr Spencer was the manager of the works and lived at Nantyglo House.

In 1874 Beaufort Works closed though was later leased by Mr William Lewis of Church Cottage, Beaufort, owner of several collieries.

Messrs Battersby and Co of Liverpool.
On Monday 12th February 1877 Messrs Battersby and Co of Liverpool with their consulting engineer Mr Sugden accompanied by Mr S. Griffiths the colliery manager of the Nantyglo Iron and Coal Company, visited the Upper and Lower Deep Collieries of the company at Blaina and inspected both pits with a view to leasing. Messrs Burgess and Shaddick and Co of Cardiff also visited the Henwain Colliery with a view to leasing that colliery. Nothing more of this proposed lease was ever mentioned in local papers.

Winder Accident.
On Tuesday 20th February 1906 the cage was being lowered down the shaft at the Lower Deep Colliery, Blaina when the engine ran wild. At the time nine men were in the cage, which descended 180′ feet at a terrific rate, they had a miraculous escape sustaining no more than a severe shaking. It was reported that the crank-pin of the winding engine shook loose.

Workforce.
On Saturday 27th September 1913 the Western Mail newspaper reported that there were 1,200 men out of work at the Lower Deep Pit as the result of a dispute at the colliery.

Winding Accident.
On Saturday 1st August 1914 another winding accident occurred, eight men were in the cage being lowered when the engine failed, five men were seriously hurt as the cage fell to pit bottom. It was reported all the men came out of the pit and it remained idle until after the holidays as a consequence of the accident.

Workforce.
In 1916 the workforce at the Lower Deep Colliery was 900 men, as reported in the South Wales Gazette on Friday 12th May 1916.

The Ebbw Vale Company.
In July 1915 the collieries of Messrs Lancaster was under the control of Messrs D. Davies and Co.

Beynon’s Colliery.
In the early 1920’s the Beynons Colliery was sunk. All the other main seams were passed through and tunnels driven from the North Blaina and the Lower Deep to enable all coal to be delivered to the pit-bottom of the new pit from those present workings. (The Henwain Colliery had already closed by this time) It was projected that in the future a cross measure drift be driven to reach new areas of coal.

The Power House Fire.
On Tuesday 28th August 1923 a fire broke out in the power-house of the Lower Deep Colliery, Blaina. It was caused by the fusing of some electric wire and was mostly confined to the roof of the building. A dynamo which controlled the underground haulage and also some of the underground lighting was damaged although it caused little inconvenience to the men working below ground.