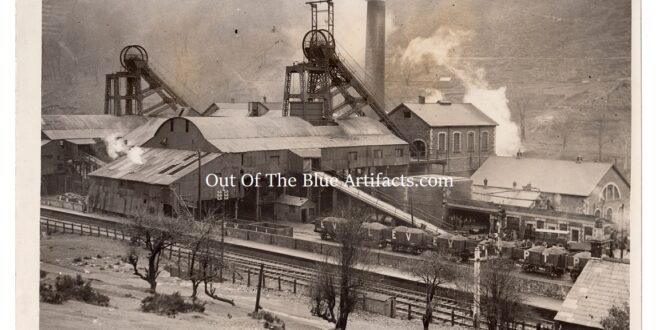 The Marine Colliery Disaster.
The Marine Colliery, Cwm, Ebbw Vale was owned by the Ebbw Vale Steel, Iron and Coal Company Limited. The colliery had two shafts each about 400 yards deep 18′ feet in diameter. No.1 up-cast pit working the Old Coal Vein. No.2 down-cast pit working the Elled Big Vein and Three Quarter coal seams. The general manager of the collieries owned by the company was Mr H. McVicar with the certified manager at the Marine Colliery being Mr Edward John Gay. Mr D. J. Michael and Mr. W. Wakely were certificated under-managers.

The Explosion.
On Tuesday 1st March 1927 at 12.50am in the morning an explosion occurred at the No.1 pit at the Old Coal Vein on the eastern side of the shaft about one-and-half mile away from its entrance. At 1.05am the general manager Mr McVicar and Mr Evan Evans an overman arrived at the colliery and descended No.2 shaft, after proceeding into the district they saw Mr Pester laying on the ground. Mr Pester later died in hospital. The second man found was Mr Wilfred Button, who, partly buried was recovered and taken to hospital where he later died.

Rescue Teams.
Shortly after the explosion was reported rescue teams from Abertillery, Six Bells, Waunllwyd, Abercarn and other districts were sent to the Marine Colliery, Cwm. The Crumlin Rescue Team under the supervision of Mr A. T. Winborne descended the west side of the pit and found it unaffected. They returned to pit-bottom and with Mr Gay and Hann the team headed into the return road where they found the air foul, the group had to retreat back to pit bottom and it was reported that every one of the rescue team had been affected by gas. When they recovered it was 7.00am. There were 130 men working in the affected area and only eleven got free by themselves.

Following the explosion there were big falls of roof, along with fires and spread of great volumes of gas and tons of earth cut off many of the men from escape. Rescue operations began at once and brigades from all over the area were soon on the spot. Men from the non-affected parts of the mine were brought out first. Many men women and children ran from Cwm and other places and the crowd held a tragic vigil at the pithead.

Early Wednesday afternoon the rescue workers were overcome, the Mines Inspector for the district prohibited any further work until the workings had been ventilated, at this time only twenty-one bodies had been recovered. After an interval the air was tested again with canaries and twelve of the birds were brought up dead before the air quality was clear for operations to resume. A tragic feature of this enforced delay was that previously a rescue party had seen three men laying injured without being able to reach them.

Many acts of gallantry were performed, among the rescue parties were Mr H. A. McVicar, general manager, Mr Frank Hann, a managing director, Mr Oliver an official, Mr Roberts the chief electrical engineer and Mr W. H. John the mines manager. During the rescue Mr Roberts and Mr Oliver collapsed at the bottom of the pit and Mr John had been overcome and was unconscious for a time, three attempts were made to locate him before he was found face down in a passage and was taken to an ambulance.

Others in the party were – Superintendent D. R. Davies of Cwm Street Ambulance Brigade, Dr Edward Trevor Hale, Dr F. W. O’Sullivan, Dr McGray and Dr McIntosh. Dr O’Sullivan volunteered to descend the pit to administer morphia to the sufferers and to superintend their removal to hospital. Mr Benjamin Whatley of one of the rescue parties members from a neighbouring colliery attempted to go into the heading on three occasions though was driven back by the accumulation of gas.

Dr Edward Trevor Hale of Cwm gave a graphic account of the conditions his party experienced. They were hampered not only by the dense volumes of gas but also by water, which rose in many places as high as their waists, their rescue party had to wade through icy-cold water and clear heavy falls of timber and coal to advance into the workings. It was Mr Hale’s group that had found Mr John the mines manager and brought him to safety. Mr Hale stated that he had seen 19 men laying dead in a group, many with badly burned bodies. At that place the coal dust had become fired and at various points small conflagrations had broken out to add to the other dangers and terrors.

All four doctors worked unceasingly in a noble effort under harassing conditions. Dr O’Sullivan distinguished himself in a perilous piece of rescue work. Two men were said to have been laying in a hole in the pit seriously injured and he volunteered to go back down to their assistance.

Mr Stanley Baldwin.
On Wednesday 2nd March 1927 Mr and Mrs Stanley Baldwin Mr Baldwin being the British Prime Minister at that time visited the Marine Colliery after the explosion though did not have a warm reception by many. They had met with Mr Arthur Jenkins the miners agent, Labour representatives also gave praise to the couple who took time to visit the bereaved though they were booed by crowds at the pithead and had to get into their car and was driven away from the area.

The Recovery Work.
At 6.30pm Wednesday evening it was reported that fifty-one men were still entombed and all hope of them still being alive had been abandoned on account of the presence of large amounts of gas.

On Thursday night 3rd March 1927, it was reported that all but nine bodies had been recovered and removed, canaries had been used all afternoon and one was badly affected by gas, the bird was brought to the surface where it was placed in an oxygen chamber to be revived.

Throughout the week bodies were being recovered from the mine, most sadly disfigured from the explosion or from the pressure of the falls. The police, under the direction of Superintendent W. Edwards insisted those who came to claim a body had to describe the marks or the clothing or the boots minutely before they see the body. One victim was identified by a bayonet tattooed on his arm, another by the way his boots had been repaired and another by the peculiar way he tied his “yorks” around his knees. Heavy falls in the district below ground were frequently occurring and hampering recovery work.

Mr H. McVicar the company collieries manager was aided by Mr John Kane M.E., of Ynyshir, Mr Kane was an expert in recovery work after explosions and his assistance was said to have been beyond value.

On Friday 4th March 1927 it was reported 19 bodies had been recovered and brought to the surface with five or six men being located.

Mr Reg Davies and Mr W. Crowley were ex-servicemen and it was reported that their comrades of the services attended in large numbers. The Tredegar Company of the 3rd Brecon and Monmouth Battalion of the Monmouthshire Regiment formed bearer parties and a firing party with buglers.

On Sunday 6th March 1927 the body of Mr John Rogers of 18 The Huts, Cwm was recovered though kept below ground at that time.

Official Inquiry Verdict.
An inquiry, a joint one on behalf of the Home Office and the Coroner and Mr Henry Walker, the Home Office Commissioner into the cause of the explosion began in March 1927 and went through to July in which it occupied thirteen full days, during which eight witnesses were examined and over 18,000 questions asked were answered. At the closing stages of the inquiry in August 1927, it was decided the explosion was accidentally caused by a gas explosion carried on to an extent by coal dust.

The Memorial Tablet.
On Thursday 29th September 1927 Sir Frederick Mills, Bart, D.L., J.P, chairman of the Ebbw Vale Steel, Iron and Coal Company unveiled a memorial tablet at the Cwm Institute to the 41 of the 52 men who lost their lives in the explosion at the Marine Colliery, Cwm on 1st March 1927. The forty-one were members of the Cwm Institute being residents in the town, the tablet was erected in the entrance to the institute and bears the inscription – “This tablet is erected to the memory of our fellow members who lost their lives in the Marine Colliery explosion on March 1st 1927”. The memorial was a result of the efforts by a special committee, of which Mr T. H. Meredith was chairman, Mr Emlyn Williams vice-chairman and Mr J. H. Row as secretary.

The report on the Marine Colliery disaster was taken from the Western Mail, South Wales Gazette, Birmingham Daily Gazette and the Cheltenham Chronicle.

Notes of Interest – Bus Crash at the Funeral of the Disaster Victims.
On Sunday 6th March 1927 two men were killed and many were injured when a bus taking mourners to the funeral of the disaster victims overturned and fell over the bank close to the Marine Colliery, Cwm. The men killed were Mr Fred Jones of Woodfield Side, Blackwood and Mr William Jones of 6 Railway View, Pontllanfraith. It was reported that two of the injured were in a serious condition.