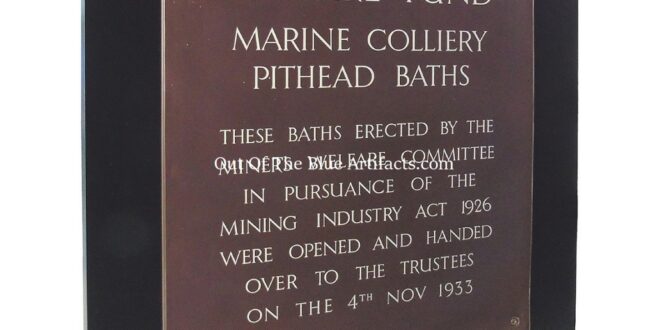 The Official Opening.
On Saturday 4th of November 1933, the Marine Colliery Pithead Baths were officially opened. The opening ceremony was presided over by Sir John Beynon Bart C.B.E., the chairman of the directors of the Ebbw Vale Company with Sir J. Lowes Dickinson and Mr E. J. Gay the manager of the colliery and the chairman of the baths committee the Marine Colliery, Cwm, Ebbw Vale.

The Contractor and Architect.
Messrs W. Miles & Sons of Ebbw Vale were the contractors. It was stated that Mr William Miles the head of the company had previously constructed the washery at the Marine Colliery, Cwm and now his son Mr C. W. Miles had built the pithead baths. The architect was Mr J. H. Forshaw, assisted by Mr W. H. Traylor.

Description of the Building.
The Marine Colliery Pithead Baths was constructed with Ebbw Vale red bricks and had an exterior of the noted Ebbw Vale russet brown facing bricks. Built on two storeys it had 1,440 clean lockers and 1,440 dirty lockers. They were constructed by the Miners Welfare Fund at a cost of £26,000.