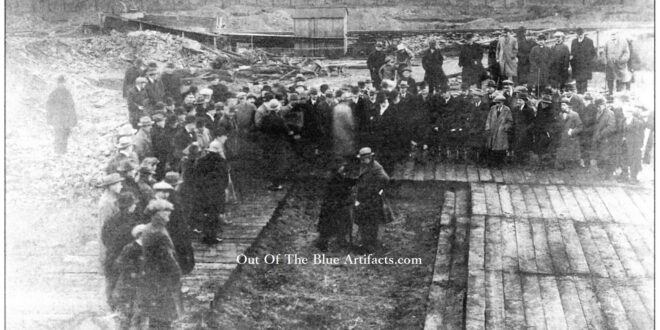 The New Colliery – Aberbeeg.
In 1918 the Messrs J. Lancaster & Co planned to sink a new colliery in the Cwm Valley at Aberbeeg. Arrangements were made with the Great Western Railway to install railway sidings branching off the main line from Aberbeeg to Cwm.

In 1919 it was still in the planning procedure but owing to the uncertainty of the financial situation at this time, it was again put on hold. Though in early 1920, the company decided to go ahead with its construction and the opening went ahead.

After the cutting of the sod by Lady Mather-Jackson they all retired to a tea held in a marquee close by, after the speeches Mr Ben Owen presented Lady Mather Jackson with a silver card-tray, inscribed with the words “Presented to Lady Mather-Jackson J.P., O.B.E., by the officials of Messrs J. Lancaster and Co Ltd, on the occasion of the inauguration of the new pits at Aberbeeg, December 4th 1920” Mr Owen also said that the next time Lady Mather-Jackson came to Aberbeeg it would be to open the pithead baths at the site.

The Colliery Details.
The new colliery shafts would have been 20′ feet in diameter and 500 yards (1,500′ feet) deep and sunk to the Old Coal Seam, it was said that there were an estimated 1,200 acres of coal available and the output – when the pits were fully developed would have been 1,000,000 tons per year. The colliery would have been electrically equipped throughout, the power being obtained from the Electrical Generation Station at Victoria, Ebbw Vale and transmitted by an overhead line at 20,000 volts to Aberbeeg where it would have been transformed to a working voltage of 2,000 and 500.

The Six Bells Power Station would also have been coupled up to Aberbeeg and would have acted as an emergency service in the event of any interruption in the supply from Victoria. When the colliery was fully developed employment was said to have been for 2,500 men, it was intended to work the colliery entirely by mechanical means. Coal cutters and conveyor belts would have been used throughout and the use of horses would have been eliminated.

The Financial Situation and the Colliery.
After the opening ceremony the financial state of the country made the owners and shareholders think twice about the construction and development on such a large scale and plans were again shelved. The company seemed to abandon the new colliery completely.

On May 8th 1925 it was reported that the Partridge, Jones and John Paton Ltd Colliery Company made a start to resume the sinking of the abandoned new colliery. The railway bridge which carried a single track into the site was being repaired and strengthened and the one shaft was sunk to the “hard” which was about 120′ feet in depth, the surface was scraped off the other shaft in readiness for its sinking.

The Later Years.
A short while later their plans were yet again put on hold and this colliery project was again abandoned and later forgotten. The top sections of the bricked shafts can still be seen today.