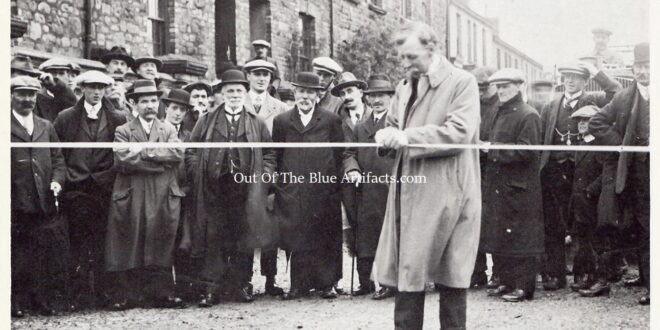 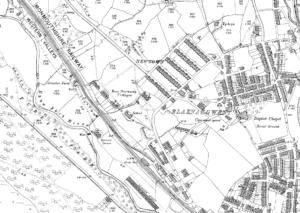 The New Road to Blaina – Rose Heyworth Road.
Originally the main road to Blaina from Abertillery was the Old Blaina Road, the road began at Bridge Street, Abertillery, it went northwards along the base of the Arael Mountain on the western side of the river to the Tilers Arms, Blaina. On this route was a right-of-way at Glo-Byllau Farm (the Cider House) which led to the colliery. On the eastern side of the river there was a dirt track leading to the Rose Heyworth Colliery from the bottom row of the Blaenau Gwent Rows taking the route along where Smith Road is now, up past the rubbish tip which later became the County School Playing Fields and into the colliery. This was a private road constructed on land owned by the South Wales Colliery Company and the Nantyglo and Blaina Company, it was improved upon by a better road in the mid 1890’s although used the same route (as seen on the 1900 map left). There was no road from Abertillery to Blaina on the eastern side of the valley.

People or traffic accessing the colliery from Abertillery had to travel either up through Blaenau Gwent, Spring Bank past the Clyn Mawr Hotel and across Blaenau Gwent Rows, or up Oak Street and carry on up Ty-Bryn and across the rows, when new Gladstone Street (northern section) was constructed it terminated at the top of Oak Street and Ty-Bryn to form a dangerous and awkward bend. There were a few cottages at the top of Oak Street just below the Blaenau Gwent Rows, they were constructed with a dead-end, these cottages are now on the new road and are part of the Rose Heyworth Road.

The First Proposal of a New Road to Blaina – Rose Heyworth Road.
In 1898 it was proposed to have a road laid-out along the eastern side of the valley from Abertillery to Blaina, the owners of the land were prepared to give the council £500 towards its construction. Plans were put on hold.

The Second Proposal of a New Road to Blaina – Rose Heyworth Road.
On Friday 17th June 1904 the South Wales Gazette reported on a monthly meeting of the Abertillery District Council on the previous Monday 13th June 1904 – Mr J. Tarrant J.P., (Chairman); Mr R. Downs (Vice-Chairman); Councillor William Thomas; Messers W. Lewis; D. Lloyd; G. Little; A. C. Willis; G. Jones; T. H. Prichard; G. Purnell; D. Lewis; F. Athay; E. J. Williams and W. Harris: With Mr J. A. Shepard (Clerk); Mr W. Gait (Assistant Clerk); Mr J. McBean (Surveyor); Mr L. Lewis (Assistant Surveyor); Mr F. Padfield (Sanitary Inspector) and Mr D. Edwards (Collector): At this meeting a discussion arose with reference to the proposed new road leading to Blaina on the eastern side of the river. Mr G. Little though it was obvious that it was necessary to get a road from Abertillery to Blaina up that side of the valley. Mr J. McBean was instructed to prepare an estimate for a new road from Oak Street, Abertillery to Blaina.

It was at this meeting that the question of certain rights-of-ways were explained, one at the Glo-Byllau Farm (Cider House), yet none was known to exist on this eastern side, the road from Blaenau Gwent to the colliery was private and belonged to the colliery company. Mr Thomas said he hoped the landowners would offer to help again and in the meantime be able to see what other rights-of-way existed which would help the men as Mr E. J. Williams pointed out that men were being fined for crossing the railway lines away from the official footpath. The question was referred to the Roads and Bridges Committee.

From that last meeting plans were put on hold again.

On Friday 19th June 1908 a letter dated 16th May 1908 was read to the council from Mr T. Jones (Secretary) of the Griffin Building Club, Blaina. Mr Jones enquired whether there were any prospects of a road being made on the eastern side of the valley between Blaina and Abertillery as they were desirous of building houses in the direction of Rose Heyworth.

The New Road Extension.
In November 1909 Mr Boots (Councillor) reported on the proposed extension of the new road, Rose Heyworth Road, down past the cottages and through into Gladstone Street, Abertillery. Mr Boots was unhappy with the proposal as the scheme was to cost about £3,000 and the landowners would only subscribe £1,000.Mr Boots stated that the council would be spending public money for the development of private owners property. After two-years of wrangling, dithering and deliberation the work on the new road was eventually authorised.

The Start of the Construction of the New Road – Rose Heyworth Road.
In December 1911, in connection with the new road it was reported that the pegging out and levelling had been completed. The work on laying the new road began in May 1912 and a quarry was opened out half way along its route to supply the stone. The road was to be constructed by the Abertillery District Council by direct labour and under the supervision of Mr Lionel D. Lewis. With its construction a direct route from Blaina to Crumlin would be established and it was anticipated that considerable developments would take place. At that time the council were making plans on major building schemes along the finished new road.

Land Owners that were Involved.
The new road had been constructed through the Nantyglo and Blaina Company’s estate and they had given the required land and £1,000 towards the cost, the South Wales Colliery Company had also given land and £100 towards costs.

In February 1913 it was reported that the council paid one-fifth of the cost of the construction of the road and they were to arrange taking over the maintenance, although that was to be arranged when the road was finished. 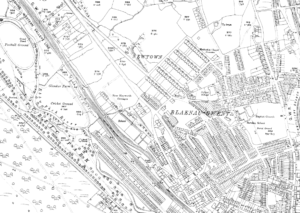 Description of the Rose Heyworth Road.
The new road was one-mile in length, 36′ feet in width with a carriage way of 24′ feet, with a six-foot pathway on each side. It was well graded with the steepest place along its course being just 1 in 64. The quarry used was to supply stone for its foundations. The making of the road (as seen on the 1920 map right) made way for the opening up of Gladstone Street from the north, which meant that it did away with the dangerous and awkward corner at the top of Oak Street. The cost of the new road was said to have been £5,000. The only variation from the older route along the eastern side was that it by-passed Blaenau Gwent Rows and Smith Road. This section of road linked Crumlin and Blaina with a faster route.

Tree Planting.
On Friday 12th March 1915 the South Wales Gazette reported a meeting of the Abertillery District Council’s Roads and Bridges Committee which it was stated that the further planting of trees along the Rose Heyworth Road had been deferred. The committee commented upon the damage which had recently been done to the trees that had been planted earlier on such road.

Electric Lighting.
In December 1915 it was reported that the Abertillery Urban District Council were in the process of lighting Rose Heyworth Road from one end to the other.

Points of Interest – The photograph of the official opening of Roseheyworth Road in May 1914 was taken outside No.25 Rose Heyworth Road, close to where the bus shelter near the entrance to Morley Road is today.