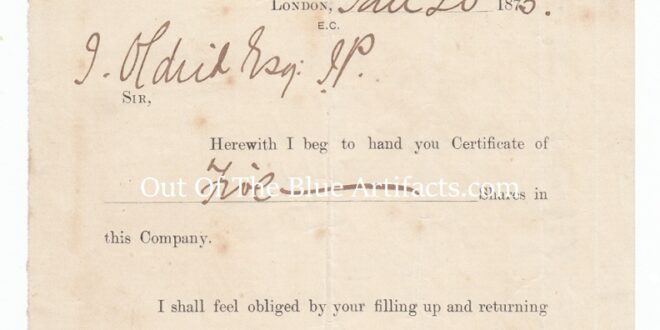 The Newport Abercarn Black Vein Steam Coal Company Limited – A Letter of Conformation of Share Certificate.
This letter of confirmation of a share certificate was given by the secretary of the company Mr J. E. Clark to gentleman (illegible) on the 20th of January 1875. It is five shares in the company which at this time each share was £10 in value so a total of £50 of shares, the share value at this time is equivalent to approximately £5,400.00 in today’s money.

N.B. Other gentlemen joined the board after this date.

The prospectus stated – In March 1873 the company was formed for the purpose of acquiring and working the very valuable leasehold property known as the Celynen Estate, Abercarn, Monmouthshire. The property was one of the most extensive mineral takings in South Wales being about 1,200 acres in extent. Additional properties of several hundred acres are commanded by the estate and may be secured if desired.

The Sinking of the Colliery.
On 17th of April 1873 tenders were invited for the “Sinking of Three Shafts” at the Celynen. On Tuesday 27th May 1873 the ceremony of cutting the sod was reported and on Saturday 25th November 1876 celebrations took place on the occasion of the finishing of the sinking process.