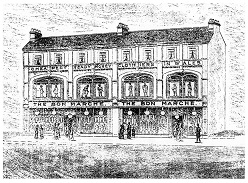 The name Bon Marche is French for “Good Market”. I believe the name was originally taken by its then owners Messrs T. Davies and J. H. Powell. Though, as seen below it may have been called by another name until 1890. (More research is needed).

Messrs Powell and Jones later launched out in other localities with branches of their Bon Marche stores in Blackwood, Aberdare and Ebbw Vale, all owned by Mr Jones himself.

On August 7th 1894 the Bon Marche nearly burned down from a chimney fire.

In January 1899 to keep pace with the increasing trade Messrs Powell and Jones extended their showrooms and made extensive alterations (as seen on the image above). In the same year Messrs Powell and Jones applied to the council for permission to rent the wall at the railway station for the use of advertising the Bon Marche, it was granted at £5 per year for seven years contract.

The New Bon Marche Proposal.
In October 1901 Messrs Powell and Jones decided to add a much larger grander building north of their present premises, a building similar in style and size to the new Pontlottyn Store that was constructed three years earlier. They presented the plans to the architect Mr G. C. Hillard to the council and were approved on October 23rd 1901.

The name of Bon Marche is French for “Good Market” the name was taken by Messrs Powell and Davies in the latter 19th century.