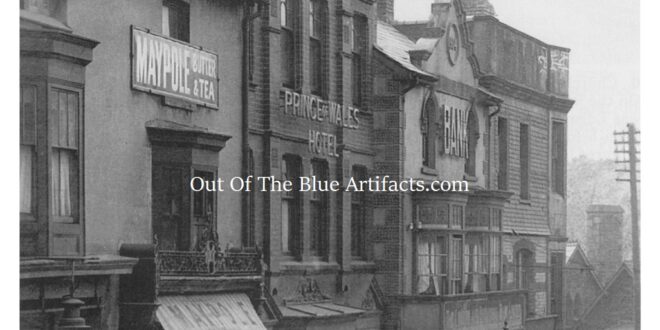 Mr and Mrs William and Martha James.
In 1887 Mrs Martha James was licensee and the inn was still owned by Mr Sarah Ann Edmunds. In the late 1870’s Mr and Mrs James had been licensees of the Somerset House, Abertillery. Mr William James was born in 1823 at Pembrokeshire, Wales and was a coalminer and inn keeper. Mrs Martha James, born 1822 at Monmouthshire.

Mrs Sarah Ann Edmunds Loan.
In 1891 Webb’s Brewery records show that Mrs Sarah Ann Edmunds borrowed £700 from the brewers. It stated that Messrs J. R. & T. A. Webb were her tenants, they could stay there rent free until the loan was paid. At this time Mrs S. A. Edmunds also owned property at Usk, Monmouthshire.

Messrs Webb Aberbeeg.
In 1892 Webb’s Brewers of Aberbeeg owned the Prince of Wales Inn, Abertillery and from 1892 to 1895 Mrs Martha James held the license. I am not sure if Mrs Sarah Ann Edmunds defaulted on the loan or she sold out to the Webb Brothers?

Mr John Zachariah Edmunds.
In 1901 Mr John Zachariah Edmunds was listed as licensee and Messrs J. R. & T. A. Webb were the owners. Mr Edmunds was the eldest son of Mrs Sarah Ann Edmunds, had taken over the license and was living at the Prince of Wales Inn with his wife Mrs Harriet Edmunds, born in 1867 at Swansea and their children – Master William H. Edmunds, born 1890 at Pontardawe, Glamorgan and Miss Doris M. Edmunds at Brockweir, Gloucestershire. Also living at the inn were – Miss Polly Redick a servant from Coleford, Somerset and Miss Ethel Morgan a nurse from Abertillery:

The Sale 1902.
On Wednesday 22nd October 1902 the Prince of Wales, Abertillery was put up for sale at auction at the Westgate Hotel, Newport. The bidding started at £2,000 though the property was withdrawn at £6,500.

Mr A. E. Patey.
In the early 1900’s Mr Arthur Edwin Patey was licensee of the Prince of Wales Hotel, Abertillery. Mr A. E. Patey was the son of Mr and Mrs William and Eliza Patey of Somerset. William Patey was a railway inspector. Arthur Edwin Patey was born in Cardiff in 1878. In 1897 he married Miss Laura Constance May Weare of Usk, born 1878. They had a son Trevor Patey born in 1899 and the family moved to Abertillery and Mr Patey was a stone mason by trade though became landlord of the Prince Of Wales Inn, Abertillery.

In 1906 Mr A. E. Patey left and became landlord of the Coach and Horses, Six Bells.

The Webb’s Western Valley Quoit League January 1921.
On Friday 14th January 1921 the South Wales Gazette printed the Webb’s Western Valley Quoit League team standings. The teams were as follows – The Lamb Inn, The Prince of Wales, The Commercial, The Cwm Hotel, The Royal Exchange, The Globe, Ebbw Vale, The Mitre, The Colliers Arms, The Crown, The Railway, The Old Bridgend Inn, Aberbeeg C.C., The Abertillery D.S.D.S. and the South Wales Inn, Cwmtillery.

A Tribute to a Sportsman.
On Sunday 19th March 1950 a moving ceremony took place at Abertillery Park where the last wish of Mr Glyndwr Roy Winstone, landlord of the Prince of Wales Hotel was carried out. As mentioned Mr Winstone was a victim of the Llandow Air Disaster, he had asked that his ashes be scattered over the field at the park so that he could be present at every match. The ashes were scattered by his son Mr Stanley Roy Winstone assisted by Mr G. A. Fairclough, also present were – Councillor G. R. Shingler J.P. (Chairman of the Council); Mr H. J. Williams (Clerk of the Council); Mr W. E. Hodges and Mr D. Morgan MM, (Councillors):
(More details below).

Mr Horace Lewis.
In March 1951 Mr Lewis transferred from the Lamb Inn, Abertillery and became licensee of the Prince of Wales Hotel, Abertillery. Mrs Lilian Martin was the agent for Mr Lewis and worked as barmaid at this time.

The Abertillery and District Dart League.
In the 1950’s the Colliers Arms featured in the Abertillery and District Darts League. The Colliers Arms were one of many teams in the two division dart league. The teams that featured were as follows – Division 1 – The Crown Inn “A”, The Colliers Arms, Aberbeeg Club, The Fountain Inn, The Hanbury Hotel “A”, The Cwm Hotel, Abertillery. The Lion Hotel, The Castle Hotel The Prince of Wales, The Coach and Horses, The Bell Hotel “B”, Somerset Hotel “A”, The Six Bells Hotel and The Mount Pleasant. Division 2 – The Clyn Mawr Hotel, Ralphs Club, The Hanbury Hotel “B”, The Bell Hotel “A”, The South Wales Inn, The Arrael Griffin Club, The Six Bells Club, The Royal Exchange, The Globe Hotel, The Railway Hotel, The Somerset Hotel “B”, The Crown Inn, Blaenau Gwent “B” and the Rolling Mill, Abertillery.

The Later years.
After the departure of Edwards Ironmongers the old Prince of Wales building was used as a Discount Store and Kutz & Kurlz Hairdressers.

Point of Interest –
The Llandow Air Disaster.
On March 12th 1950 Mr Glyndwr Roy Winstone was tragically killed in the Llandow Air Disaster. Mr Winstone was in a party of Abertillery rugby fans along with supporters from Abercarn, Risca and Blaenavon returning home from a rugby five-nations game in Ireland. They were travelling in an Avro Tudor aeroplane named “Star Girl”. While coming in to land at Llandow in the Vale of Glamorgan, South Wales the plane struggled at low altitude and as the pilot increased the power the engines stalled, the aeroplane hit the ground and came to rest in a field close to the village of Sigingstone. There were 83 onboard, 78 passengers and 5 crew, only three survived.

Just three-weeks after the disaster on April 5th 1950 the daughter of Mr Brinley Austin Jones of Pantypwdyn Road, Abertillery was killed in a road accident. The South Wales Gazette reported Miss Sheila Ann Jones aged 5 years was playing hop-scotch outside her home on Pantypwdyn Road, a lorry appeared and she and her friends jumped onto the pavement out of its way, seeing she had left her hop-scotch piece on the road she tried to retrieve it, she did but got hit by the lorry while trying to get back to the pavement. The lorry driver saw the little girl and swerved to avoid her though she moved the same way and jumped in front of the vehicle.