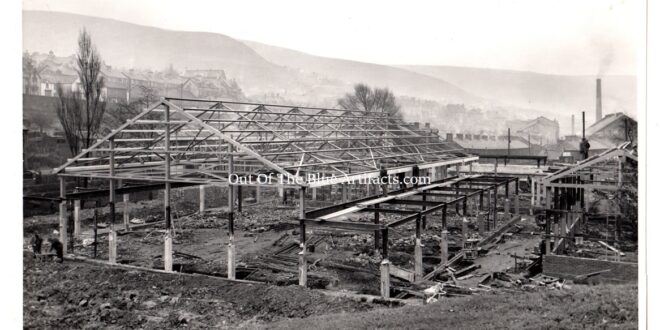 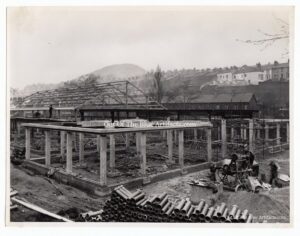 Remploy.
Remploy was established in 1945 under the terms of the Disabled Persons Act of 1944, it is an organisation owned by the Department of Works and Pensions in the United Kingdom and provides employment and employment placement services for disabled people.

Abertillery Remploy.
On Friday 21st September 1945 the South Wales Gazette reported – The first meeting of the Abertillery Disablement Advisory Committee took place and Mr D. Granville West presided. The committee had been set up under the provisions of the Disabled Persons (Employment) Act 1944. They were to advise the Ministry of Labour and National Service in matters relating to the employment of disabled persons in their own district.

The committee would be called upon to survey the general problem of the employment of disabled persons and to make recommendations on any steps that might be taken to enlist the co-operation of employers. The district covered by the Abertillery Committee consisted of the area of Abertillery and Newbridge Employment Exchanges which roughly cover the whole of the Blaina and Nantyglo U.D.C., Abertillery U.D.C. and Abercarn U.D.C. areas.

The secretary of the committee, who was also the manager of the Abertillery Employment Exchange reported that there were 216 men and 6 women on the register of disabled people who were employed in the district covered by the committee.

The Factory Proposal.
On Friday 20th December 1946 at a monthly meeting of the Abertillery District Council a letter was read from the Disabled Persons Employment Corporation with regards to the erection of a factory at the entrance of the lower Park, Abertillery. Replying to a question asked by Mr Oswald Trilla (Chairman), Mr Idris Pope J.P., stated that the Warwill Foundry Company had been given first option of the site concerned and the matter was left.

On Friday 4th June 1948 the Abertillery and District Disablement Advisory Committee stated that there were 1,080 people on the disablement register at Abertillery and Blaina, of these 297 were unemployed, 285 were men and 12 were women.

The proposed factory at Abertillery was said to have been one of twenty-one across Wales which was authorised by the Sub-Committee of the Ministry of Work.

A site was acquired at the lower Park, close to Bridge Street, Abertillery and planning was put forth. The land in question belonged to Pontypool Park Estates and was as stated offered to Warwill’s Foundry. It seems they had turned the offer down and it was later taken by the ministry.

The Aberbeeg Remploy.
In 1848, as of the delay in planning and construction at Abertillery the ministry opened a temporary Remploy factory at Aberbeeg.

The Construction of the Remploy at Bridge Street, Abertillery.
In June 1949 the work of building the Remploy factory began though was held up by subsidence that had affected the site. It was reported that a standard factory building could not be constructed and that the then present building plans had to be adapted for the site.

The Aberbeeg Remploy Closure.
On Saturday 20th January 1951 the new factory at Abertillery had been completed and was ready for opening. The Aberbeeg factory closed and all workers were transferred to Abertillery.

The Official Opening of the Remploy Factory, Abertillery.
On Monday 22nd January 1951 the Remploy Factory at Bridge Street, Abertillery was officially opened. There were no reports on its opening ceremony though it was stated that the factory would employ between 30 to 40 disabled people making industrial gloves and the building had its own canteen.

Mr W. Lane.
Mr W. Lane of Blaina was foreman at the factory.

The Departure of Mr W. Lane.
In July 1951 Mr Lane left Abertillery to become a manager at a factory at Wallasey, Merseyside, England.

The Depature of Mr W. Soffe.
In December 1952 Mr Soffe left the factory to take a new position in London, England.

Mr G. Thomas.
In the late 1960’s Mr G. Thomas was manager at the Remploy, Abertillery.

The Fire.
In March 1968 a devastating fire broke out at the Remploy factory, Abertillery. During its refurbishment the machinists were working in temporary facilities at the canteen. At this time the factory employed seventy people.

The Bridge Street Factory Closure.
In 2005 Remploy at Bridge Street, Abertillery closed, the workforce and staff were transferred to the factory Unit 6-9, Cwmtillery Industrial Estate.

In 2005 ministry sold its lease of the factory at Bridge Street, Abertillery to a manufacturer of high-class wooden windows though the firm went out of business in 2009 and the lease was surrendered to the estate. The factory was left and was damaged through vandalism in 2010 rendering the building unlettable.

In early August 2012 it was announced that the Remploy factory Cwmtillery was to close along with other Remploy factories across South Wales at this time.

Photographs.
The photographs of the construction of the Remploy factory shown are two of four official images taken by the Ministry of Works in January 1950. These photographs are 8″ x 10″ inches in size and now form part of my collection.

(More information will be added when available).