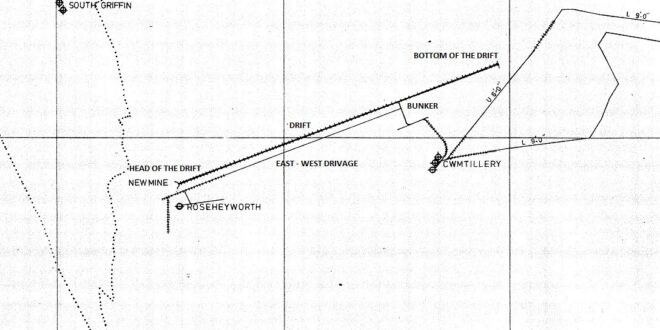 The coal and waste was taken to the main chain scraper bunker at Cwmtillery which was at right angles to the belts and in turn would empty onto the Drift Belt. The East West Cable Belt was powered by a large engine at the Cwmtillery side with its huge anchor point, rope carriage and strain tension weights at its back end situated at Rose Heyworth Colliery.

The Drift.
The Drift was 1,656 yards in length ran parallel to the East West Cable Belt only at a gradient of 1 in 5 from the back end in Cwmtillery through to the surface at Rose Heyworth Colliery. The back end was anchored at Cwmtillery and the engine was housed in a large building on the surface at Rose Heyworth – The head of the drift. The coal and waste was transferred from the Drift Cable Belt to the coal preparation plant via a series of smaller belts and transfer points.