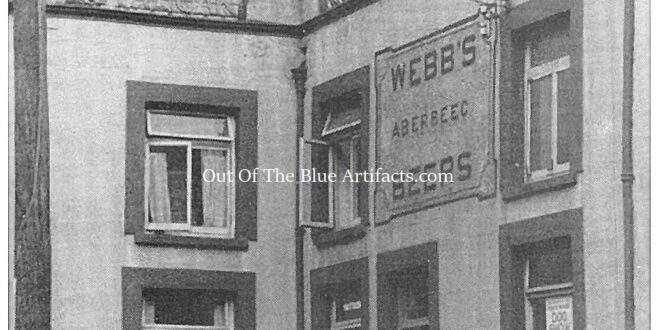 Royal Oak Inn.
The early history of Royal Oak Inn at Abertillery is a bit sketchy, there are just a few early reports on the inn, though in a National Library of Wales Newspaper from April 1902, a story was published on the history of St Michaels Church, Abertillery, as follows – Prior to St Michaels Church being constructed in 1854 all religious activity was centred around either Blaenau Gwent, St Illtyds in Llanhilleth or St Pauls, Blaina and the people of Abertillery had to travel to attend religious services at these places. A small group of churchgoers decided to hold services at Abertillery and they hired a room at the Royal Oak Inn for such purpose. It states that the Rev Daniel Rees held services in a room at the Royal Oak Inn as early as 1846.

Mr Daniel Lewis.
In 1854 a report in the Monmouthshire Merlin Newspaper, stated that a Mr Daniel Lewis had a house warming party at the Royal Oak Inn, Abertillery. Mr Daniel Lewis was at that time a land owner with property in the Clynmawr and Brynteg area of Blaenau Gwent.

The Sale of the Royal Oak Inn in 1857.
On Friday 12th June 1857 at the Oddfellows Arms Inn, Abertillery, Mr J. Philpot sold at auction the Royal Oak Inn and the 3 adjoining cottages. The tenants of the cottages were named as – Mr William Scott, Mr James Jones and Mr James Davies. The Royal Oak Inn was described as being newly erected, and contained a parlour, bar room, 4 bedrooms, kitchen, cellar, brew house, a yard and stable. The premises was under a lease for the unexpired term of 99 years at an annual ground rent of £4.

Mrs Cardy.
Towards the end of 1857 Mrs Cardy of the Oddfellows Arms, Abertillery applied for a transfer of her license from the Oddellows Arms, to the Royal Oak Inn. The magistrates obliged and granted the transfer.

Mr and Mrs James and Sarah Dutton.
Mr James Dutton and his wife Sarah Dutton from Birmingham, England, were both listed as photographers and were visiting Abertillery in the late 1870’s. They used to show exhibits with magic lanterns etc and travel from town to town. The clipping (as seen left) is from December 1879 and yet they were still at the Royal Oak Inn, Abertillery on the 1881 census, so they both must have used the Royal Oak for their shows on a regular basis.

The Death of Mr Perry Evans.
Mr Francis Perry Evans died on the 20th October 1888 and left £515. 9s. 9d. in his will. Mrs Elizabeth Evans owned a great deal of land and a lot of property in the Abertillery town area.

Miners Meetings.
In the 1890s the Royal Oak Inn, Abertillery was the venue for many miners meetings in connection with the Gray, Vivian and Arrael Griffin Collieries, Six Bells and other pits in the area, the miners agents had a lodge room at the premises. 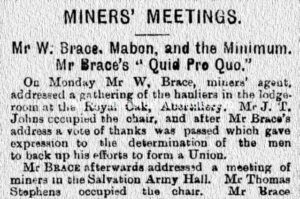 On the 11th June 1897 the Monmouthshire and South Wales Miners Association delegates – Mr Samuel Mills of Six Bells and Mr William Brace as miners agent of Abertillery, held a meeting at the Royal Oak Inn Abertillery with the aim of forming such a federation. The meeting took place in the Royal Oak Lodge Room. After this meeting The Royal Oak Inn, Abertillery was seen as the birthplace of the South Wales Miners Federation, S.W.M.F., the Fed which later became the National Union of Mine Workers – N.U.M.

The South Wales Gazette 21st January 1971.
The South Wales Gazette reported the following information on the Royal Oak Inn – The closure of the Royal Oak Inn, Abertillery January 1971 is far more than a happening in the social life of a valley town, it is an event of great historic interest but when we heard the news how many of us remember that it was the birthplace of the South Wales Miners Federation. The formation of the Monmouthshire Western Valley’s Miners Association as an organisation affiliated to the Miners Federation of Great Britain was a turning point in the history of the struggle in the South Wales Coalfield which eventually led to the creation of the S.W.M.F., and that is what took place at the Royal Oak Inn, Abertillery on the 11th June 1897. The men behind the formation were – Mr Samuel Mills and Mr William Brace.

Following is a Link to – Mr Samuel Mills.

Mr James Henry Evans.
In the early 1900’s Mr Henry James Evans, son of Francis and Elizabeth Evans, and his wife Martha Evans, born at Coleford, Gloucester were the landlord and landlady at the Royal Oak Inn, Abertillery.

Mrs Ashley.
In the 1920’s Mrs Ashley was landlady of the Royal Oak Inn, Abertillery with Mr William Ashley and Lily May Salisbury.

On 26th May 1926 an agreement was entered into between the Abertillery Urban District Council and Messrs Webb’s of Aberbeeg for the lease of 3 dwelling houses situated on the Bush Hill adjoining the Royal Oak Inn for the sum of £40 per annum over the period of 14 years.

The information on the later landlords was kindly supplied courtesy of Mr Bryan Boots.

The Later Years.
The Royal Oak was reportedly closed in January 1971. It was later leased by Mr Eric Watkins and was a Second Hand, Antique Shop, it later became a restaurant though closed and was returned to a club and became the home of the Blaenau Gwent Rugby Football Club and became known as the Blaenau Gwent Rugby Club, R.F.C. The premises closed again in the 1990’s and never re-opened, it was demolished along with the adjoining Carmel Chapel in 2015 and the site is now a car park.