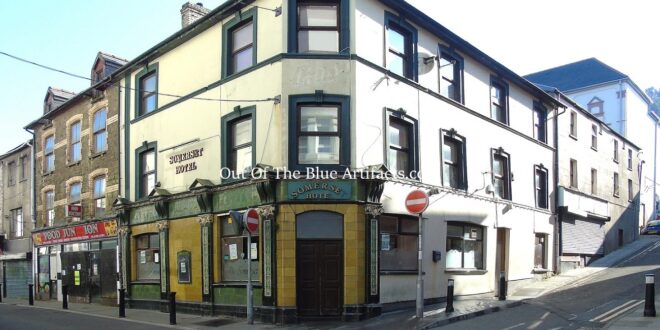 Mr and Mrs George and Mary Bence left the Somerset House in the late 1860’s and became licensees at the Bell Inn, Somerset Street, Abertillery.

Mr Joseph Ford.
In 1872 Mr Joseph Ford of Blaina was reported as being the owner of Somerset House, Abertillery though there is no record of him actually living there, it seems he was leasing the premises. Mr Joseph Ford was born in 1807 at Limpley Stoke, Wiltshire, England. His wife Charlotte Ford nee Baber was born in 1823 at Red Hill, Somerset. Mr Joseph Ford had lived at Blaina since the 1830’s, was on the 1841 census living with his wife’s family the Baber’s at Cwmcelyn and was later the landlord of the Red Lion Inn, Blaina and the Kings Head, High Street, Blaina.

Mr and Mrs William and Martha James.
In the late 1870’s Mr and Mrs James were licensees of the Somerset House, Abertillery. Mr William James was born in 1823 at Pembrokeshire, Wales and was a coalminer and inn keeper. Mrs Martha James, born 1822 at Monmouthshire. They lived at the Somerset House with their grandson Master William J. James, a tin worker and Miss Eliza Morgan a servant from Monmouthshire.

Mr and Mrs William and Charlotte Lewis.
In 1881 Mr William Miles Lewis married Miss Charlotte Ford of Blaina. Miss Charlotte Ford’s father Mr Joseph Ford owned the Somerset Inn at Abertillery as mentioned though he did not seem to have lived there, it looked as though he leased it to various tenants.

Throughout their period of ownership Mr and Mrs Lewis were also leasing the Somerset Inn to various tenants. 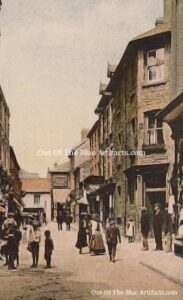 Mr Thomas Thomas – Harpist.
In October 1890 Mr Thomas Thomas suffered a tragic accident at the Llanhilleth Fair, he had been performing acrobatics when a manoeuvre went wrong which resulted in him breaking his neck. He was conveyed home but owing to his body becoming paralysed he died a week later at just 22 years of age. Mr Thomas had been employed at the Somerset Inn as a harpist since 1886 and was considered to have been a genius on the musical instrument. 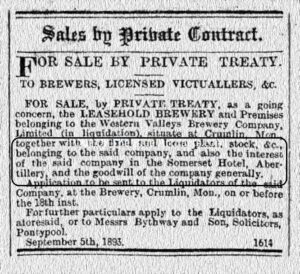 Mr and Mrs Richard and Charlotte Lewis Moxley.
In 1905 the recently widowed Mrs Charlotte Lewis married Mr Richard Llewellyn Moxley of Blaina and were both licensees at the Somerset Hotel, Abertillery. Mr Richard Llewellyn Moxley was the eldest son of nine children of Mr and Mrs John and Elizabeth Moxley of Ireland and Clutton, Somerset, respectively. One of Richard Moxley’s younger brothers Alfred Moxley would later become the gents and ladies and later gents only outfitters in Church Street, Abertillery.

The Card Trickster.
In April 1907 a Mr John Brown known as a card trickster was visiting Abertillery and entered the Somerset Hotel to ply his trade. He had asked Mr Richard Moxley, the landlord if he could set up his cards in the bar, Mr Moxley told him that he couldn’t trick his customers and barred him from the premises, Mr Brown swore at him and left the hotel. A policeman was alerted to the fracas and arrested Mr Brown on a charge of swearing obscenities, the trickster was given a £2 fine or 14 days in prison with which he took the prison sentence as he had no money to pay a fine. The fine of £2 in 1907 is equivalent to £239.70 in today’s money.

Miss Charlotte Lewis Moxley and Messrs Andrew Buchan.
In 1912 Mr David Francis Pritchard left Crumlin, I am not sure if the business was carried on in his absence or partly purchased by the Messrs Andrew Buchan Brewery company? I have seen reports on Mrs Charlotte Moxley and Mr Andrew Buchan in connection with the Somerset Hotel, Abertillery but it cannot be confirmed at this point. Messrs Buchan Brewery Company did purchase the bulk of Mr D. F. Pritchards Brewery Crumlin though that was 25 years later in the 1930’s.

At some time during the Great War Mr and Mrs Moxley left Abertillery and their son Mr Walter Lewis was left in charge of the Somerset Hotel, Abertillery. 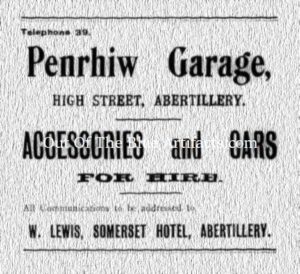 Mr Walter Lewis.
Throughout the Great War years Mr Walter Lewis, the son of William Miles Lewis and Charlotte Lewis and step-son of Mr Moxley was landlord at the Somerset Hotel, Abertillery. Mr Lewis was also manager and driver at the Penrhiw Garage on High Street, Abertillery (as seen in the advertisement left).

Mr Arthur Benjamin Frowen began his career at the Cwmtillery Colliery, moving to the Penybont Tillery Colliery as an overman. He then moved to the Vivian Colliery and became under-manager at the Gray Colliery, Abertillery. He had a brief spell at Talywain before becoming the manager at the Navigation Colliery. He left the collieries to become landlord at the Somerset Hotel in about 1920.

The Departure of Mr and Mrs Frowen.
In February 1925 Mr Arthur B. Frowen and his wife Rebecca left Abertillery to manage the Eagle Hotel at Slough, Buckinghamshire. Before they left they transferred the license at the Somerset Hotel over to Mr Frank and Lillian Brooks.

Someone managed the Somerset Hotel for an interim period in-between Mario Cordaro and Colin Yates.

The complete list of landlords and landladies was kindly supplied courtesy of Mr Bryan Boots.

The Later Years.
The Somerset Hotel, Abertillery is still trading and is one of the most popular places in Abertillery.