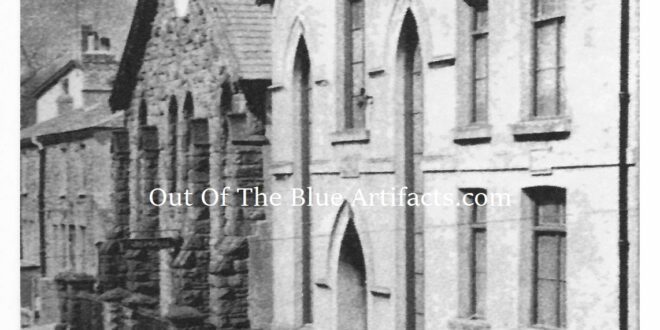 The Tabernacle Congregational Church.
In the mid 1850’s Abertillery was a relatively small village sparsely populated with only a few coal levels, two deep collieries and a tin works. Within a short while the various industries rapidly expanded and people from all over the South West of England and beyond migrated to the valley’s. The industrial development in the area saw a great inrush of population with which saw a demand for chapels for the people to worship at. Many of the immigrants were Primitive Methodists and Baptists, the Independents and Wesleyans were also represented. The Independents who were better known as Congregationalists came from Brynmawr and Blaina and were looking for a place to meet.

Mr William Harris.
Mr William Harris who managed a company shop and was also the landlord of the Kings Head Public House at Blaina, invited those Independents and Congregationalists to meet at his house to hold services. They formed the nucleus of the Tabernacle Church.

The Abertillery Connection.
Rev Jenkins of the Rehoboth Church, Brynmawr and Rev David Williams of the Berea Church Blaina took a great interest in the little “cause” at Abertillery. Brynmawr and Blaina Churches were mother and daughter and they were anxious to extend the lineage to a third generation. A rivalry developed between the two as to who should claim the off-spring at Abertillery. The Rehoboth Church invested their minister with the power to go to Abertillery with £100 that was placed at his disposal so they might obtain a site on which to build a chapel, while the Berea Church did the same for their minister though did not grant him any financial aid. Rev Jenkins and Rev Williams headed to Abertillery and placed their services to the movement.

In 1855 the Congregationalists met to discuss their options at great length and accepted the guidance of Rev David Williams without any financial aid. The church was formed under the direction of Rev Williams and the provision of a chapel became an urgent need. As they had no funds they approached Mr William Harris of the Kings Head to to make arrangements to build a small chapel, he was largely responsible for its construction.

The Original Church.
In 1855 the original chapel was built, the first services were held within four walls with only a canopy for a roof. Rev Williams served the church at Blaina and Abertillery for eleven years with the help of Rev Edmund Jones of Cefn Crib and Rev Thomas Lewis of the Trosnant.

In 1866 Mr John E. Davies, acting as secretary was authorised to extend the call of the church of which then consisted of thirty-two members to the Rev J. T. Hughes. From 1869 to 1874 the church did not have a pastorate though it continued to gain ground. The Tabernacle Church was originally a Welsh Church though as the English gained a foothold in the area with the immigration of workers to the valley a demand was made for the services to be continued in English and the change was made.

In 1874 a call was made to Rev W. Morlais Davies of Fishguard who from the start made it clear a new church was required and under his ministry a new chapel was planned.

In 1880 the church gave a call to the Rev G. S. Richards who had a brilliant career at Brecon College, he was ordained in the Tabernacle in the same year. Rev Richards was of exceptional abilities and was an organiser, preacher and pastor, all branches of the church made progress under his ministry.

In 1896 Mr Michael the secretary resigned and left the district, forty members of the Tabernacle left to form a Welsh Congregational cause at Gelli Crug and in the same year twenty members left to worship at Six Bells. Mr John Williams of Crumlin took over from Mr Michael as secretary and between 1896 and 1901 he managed to clear the debt on the church. In 1897 Rev Ben Evans left Abertillery and the church was without a minister for two years.

In 1899 Rev J. Marks Evans accepted the call and became pastor, as the old debt had been cleared off, the church launched into another venture, they purchased property in Carmel Street in order that they would extend the building. Six houses were acquired at a cost of £1,600. After securing the ground the church was extended and the remaining property in Carmel Street was sold.

The New Extension and Renovations.
In 1904-1905 the church was extended and renovated at a cost of £954 this coincided with the great revival and 146 people were added to the church membership at the Tabernacle. In the same year plans were put forth for a Sunday Schoolroom to be added to the church at Chapel Street.

The Schoolrooms Official Opening.
In 1911 the Sunday Schoolroom had been built and was officially opened. The school was built on ground adjoining the church, consisted of two storeys and were of Gothic Style.

The Contractor and Architect.
The contractor was Mr R. Hall. The architect were Messrs Habershon and Fawckner of Newport.

Description of the Building.
The building had a large assembly hall 35′ feet by 62′ feet which accommodated 400 pupils. There was also a kitchen, ante room, boiler house and heating chamber. There were ten class rooms and a lecture hall, several of the class rooms were connected by folding partitioning so they could be opened up into one large area when necessary.

The Pastor Rev J. Marks Evans presided. Rev T. Richards of Newport engaged in prayer after which the builder Mr R. Hall presented Rev J. T. Hughes (the pastor at the Tabernacle in 1866) with a gold key with which Mr Hughes declared the school open. 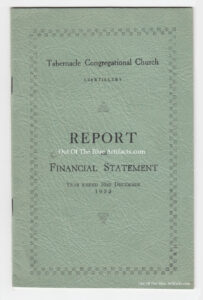 Following is a Link to – Abertillery Tabernacle Church Financial Booklet 1953.

The Later Years.
The schoolrooms has since been demolished and the site is now a car park.