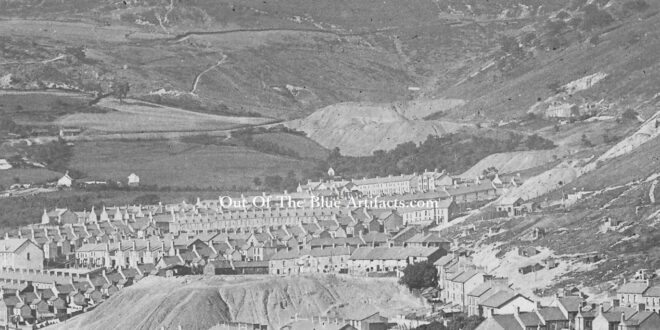 The Tillery Valley Coal Levels.
In this small area of Abertillery there were quite a few coal levels – Pullingers, Tillery, Olwen, Greenmeadow and The Coronation later renamed the Wellington Coal Level. The waste tips can be seen on the image.

Mrs T. P. & D. Price.
Mr Thomas Protheroe Price and his brother Mr David Price had sunk the Penybont Tillery Colliery between 1846 and 1850, after the opening of the colliery they absorbed the Tillery Levels into their company. The owners of the colliery more than probably leased the levels to other contractors.

Messrs Jayne.
In 1868 the Penybont Tillery Colliery and Tillery Levels were owned by Messrs Jayne. Messrs Jayne was Mr John Jayne J.P. born in Blaenavon in 1804, at an early age he entered into the services of Twining & Co Bankers and Tea Merchants of London. He later managed the provision stores of the Clydach Iron Company for several years then moved on to undertake a similar job at the Nantyglo Iron Works but on a much larger scale.

In 1869 Mr Basil Jayne, the son of Mr John Jayne, along with Mr George Finlay joined the company.

The Lost Tillery Coal Seam.
In January 1896 the company announced that after a 3-year search, they had found the lost Tillery coal seam, the collieries in the area had lost the seam 20 years earlier.

The Closure of the Tillery Coal Levels.
I have no closure date at this present time.

The Olwen Level.
This later coal level was situated just south east of the Tillery Coal Levels above where Adam Street is today.

Mr W. H. Gilson.
In 1938 the Olwen Coal Level was owned by Mr W. H. Gilson of Newhaven, Western Avenue, Newport and employed eighteen men below ground with eight men on the surface.

Points of Interest – The image also shows the waste tip of the Rhiw Park, Parc Levels in the foreground. The houses of Bishop, Blyth, Powell, Evelyn and Gray Streets. To the right halfway up the mountain are the row of houses at Cocha Duu. Just below the cottages can be seen the waste tips of the Olwen Coal Level.