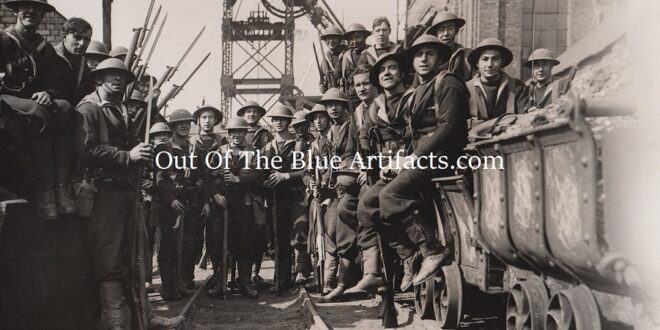 The Day The Navy Came to Abertillery

The Day the Navy Came to Abertillery – The 1921 Miners Lock-Out.
Late 1920, early 1921, the collieries in the United Kingdom were still under state control following the Great War, the post war boom in coal exports was over and demand for coal was waning, thousands of miners were to lose their jobs and massive pay cuts were to follow, hundreds of thousands of miners who were previously on generous wages were now facing months of hardship and when control of the collieries were to be handed back to the mine owners things would get far worse.

On March 31st 1921 the government gave up control of the mines, the next day as predicted over a million miners were idle, those that were in work decided to go on strike and the Miners Federation called for a stoppage. The mine owners had a lock-out.

In April 1921 the government declared a “State of Emergency” and issued the “Emergency Regulations Act” an act which meant armed forces could be sent in to deal with the situation if necessary.

In Abertillery the deep collieries came to a standstill with just safety workers trying to keep the collieries in good condition, though with plans in motion to stop the safety men and officials from working to help prevent deterioration in the mines the owners called upon the assistance of the troops.

A new volunteer defence force was enrolled for ninety days, the air force, army and navy reservists along with the police were sent to the coal mining towns in the United Kingdom, the repression and arrests of the strikers and workers (who were sympathetic to the cause) and also public speakers had begun. The struggle had to be conducted under such conditions of governmental repression the country had ever seen in well over a century. 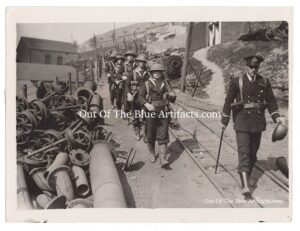 The H.M.S. Malaya.
A short while later the admiralty were called upon, they provided their professional services and on Tuesday 14th April 1921 the Battleship H.M.S Malaya a veteran of the battle of Jutland only five years previous and with hundreds of battle hardened sailors on board docked at Newport, Monmouthshire.

Around 290 sailors were ready to travel by train to Abertillery to enforce the the safety work and oversee the protection of the officials and pumping men to ensure the collieries stayed in a good state throughout the stoppage. The sailors, 290 of them from the H.M.S Malaya were called the “Blue Shirts”, (as seen in the featured image above and in the image to the left) were accompanied by 8 officers.

Their Journey to Abertillery.
While en-route to Abertillery they were told that their mission was to protect the safety workers employed at the collieries and also to quell the “rioting towns folk”. The sailors were told that the local towns-people were setting fire to the village and trying to destroy the collieries, none of which was true but this briefing stirred the navy men into action and also angered the local population.

On arriving at Abertillery Railway Station they caused further ill feeling by marching through the town with fixed bayonets and carrying machine guns. They marched to the Abertillery Drill Hall where they were quartered and a detachment was sent to every colliery in the area to provide protection where needed.

Later, the news reports of bad feelings between the sailors of the H.M.S. Malaya and the people of the town were mixed and I doubt the full truth will never be known, though reports show that the navy men were very generous and gave freely to the Children’s Food Fund which had been established for the families of the out of work miners. The sailors also entertained the local children with concert nights held at the Queen Street School, Abertillery. 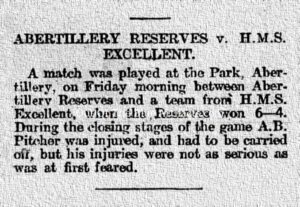 H.M.S. Excellent.
Though all that was said bad feeling and resentment of the sailors still existed to the extent that the council and agents for the miners put pressure on the government and the men from the H.M.S. Malaya were relieved of their duties in Abertillery and on April 22nd 1921 a much smaller contingent of just 120 sailors from the H.M.S. Excellent, the Royal Navy Gunnery School at Portsmouth under the command of Lieutenant Commander J. F. Paget were sent to Abertillery. The men from the H.M.S. Excellent were better received by the towns people and they put on many shows at Queen Street School for the striking miners families and joined in on sports held at the Abertillery Park.

It’s not really known how long the navy men of this second deployment were in Abertillery but another report dated May 13th 1921 stated the men of the H.M.S Excellent were going back to base and yet again the men from the H.M.S. Malaya were coming back to replace them!

The End of the Lock Out.
After 6 months of struggle and hardship, the mine owners won the battle, the demands from the miners and agents were all in vain, another ballot was held and the miners voted in favour of returning to work with immediate wage cuts and further job loses.

On the 1st July 1921 the mines re-opened, miners and agents were quoted as saying “We’ve lost the battle but we live to fight another day”.

Notes on H.M.S. Malaya.
In 1913 the H.M.S. Malaya Battle Ship was ordered from Armstrong’s and laid down on the 20th October that year. The cost of the ship which was quoted as £2,945,709. was met by the Federated Malay States. The ship was launched on the 18th March 1915 as the first R.N. ship to bear the name and her build was completed on the 1st February 1916. During the Great War she took part in the Battle of Jutland on May 31st 1916. 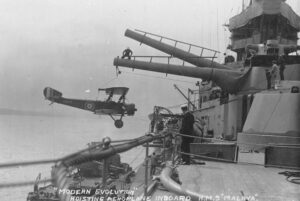 The Aeroplane.
The aircraft was a Sopwith Pup Bi-Plane, it was launched off the ship via a platform which could be temporarily constructed across the span of the 15 inch gun barrels. The plane could not land back on board but had to be winched back onto the ship from a floating barge.

The H.M.S. Malaya’s motto was “Malem Fero Malis: We Bring Evil to Evil”

As mentioned the H.M.S. Malaya was involved in the Battle of Jutland on May 31st 1916, she was hit by seven large shells, two of those were below the waterline causing her to list, another knocked out many of her six-inch guns. She suffered the most casualties of any British battleship at Jutland. 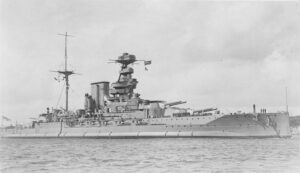 During the second world war the H.M.S. Malaya took part in a hunting group in the Gulf of Aden, in the Battle of Calabria and the Battle of Taranto. She was based in Gibraltar and aided in the bombardment of Genoa, was involved in the Tiger Convoys off the coast of Egypt, operation Harpoon and many Malta convoy’s.

The Battleship H.M.S. Malaya was decommissioned and broken up in 1948.