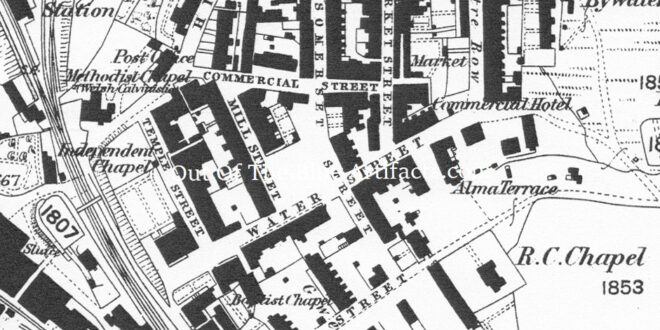 The Welsh Calvinistic Methodist Chapel – Carmel Chapel.
At the start of their religious activities at Abertillery the Calvanistic Movement held their meetings in a house in Mill Street, what is now known as Carmel Street, Abertillery. This meeting house was much later to become a Fish & Chip Shop.

In March 1874 the London Gazette issued a notice that a separate building named Carmel Chapel, a place for religious worship at Abertillery, was registered for solemnising weddings. I am unsure what this building was but it was three years before the chapel what we know today, was erected, unless the church had a building solemnised until their chapel was built?

On July 21st 1877 it was reported that the Welsh Calvinistic’s were to erect a chapel at Abertillery under the auspices of Messrs Parry, Jones & Roberts, the architect was Mr Aaron Davies of Pontlottyn, Rhymney. The cost was estimated to have been about £1,000. The main supporters of the chapel were Mrs Jane Jones of Abertillery and Mr T. J. Roberts, a railway agent, Abertillery.

The Ceremony of the laying of the Foundation Stones.
On Monday 15th October 1877 the ceremony of the laying of the Foundation Memorial Stones took place. The first stone was laid by Mrs Jane Jones, postmistress at Abertillery. She also gave a donation of £20. Collections throughout the day came to £50. The ministers who attended the ceremony were as follows – Professor Howells of Trevecca College; Rev E. Williams B.A.; Rev D. P. Davies of Newport; Rev R. Herbert; Rev E. Davies; Rev A. Davies of Rhymney; Rev V. Jones of Llanelly and Rev A. Edmunds of St Mellons: In the evening services were held in the Welsh Chapel.

The Official Opening.
On the 21st June 1878 it was reported that the Welsh Calvinistic Methodist Chapel had opened. It had been built at a cost of £1,000 and said to hold 300 to 400 people,

The Contractor and Architect.
The Contractors were Messrs Morgan & Evans of Pontnewynydd. The Architect was Rev Aaron Davies of Pontlottyn, Rhymney.

The Preachers.
The preachers who were present at the opening ceremony were – Professor Howells, president of Trevecca College; Rev Thomas Evans of Merthyr; Rev Aaron Davies of Pontlottyn and Rev John Jones (Ap Idrisyn) Brecon:

The Rev John Williams.
On Saturday 28th December 1879 while returning home on the 8.00pm train at Abertillery, the Rev John Williams of the Welsh Calvinistic Methodist Chapel could hear a child crying out for help. He ran towards the voice and found that it was from a little girl who had fallen into the Tylery Brook at the point where it empties into the River Ebbw Ebbwy. Owing to the recent thaw of the snow, large amounts of water had been flowing down the valley and the little girl who was two years of age was getting swept away. Rev Williams without any hesitation jumped into the river and rescued her.

Mr and Mrs Rev Williams.
Rev J. Williams and his wife Mrs Jane Williams were two of the original founders of the chapel, later she became widowed and owned a stationers business in the Carmel Buildings, Abertillery. After her death in September 1909 one of her two son’s took the business over. Her other son Mr J. Williams was the surveyor to the Abercarn District Council.

In the mid 1890’s the chapel closed for the need of repair, a series of fund raising concerts were held at the Trinity Chapel, Abertillery. The artistes who contributed were as follows – Misses B. Tilney and A. Stephens; Messrs E. J. Williams; Mr W. E. Watkins and Mr John Williams; Mr H. Prosser with violin solo’s and Miss R. Tilney as accompanist:

On Sunday 6th and Monday 7th October 1895, the chapel reopened after renovation, re-decoration and repairs.

In July 1903 the Carmel Chapel had undergone extensive repairs and building work with the addition of a vestry.

In May 1908 a council meeting approved plans for alterations to the Carmel Chapel building, it was noted that the work could interfere with the building line. I believe it was this alteration that the new Bell Tower was added.

The Later Years.
The chapel later closed and fell into disrepair, it was demolished in 2015 and the site is now a small car park. During demolition the engineers recovered a circular stained glass window depicting a red rose, the window is about 4′ feet in diameter and is now housed in the Abertillery Museum.

Mrs Jones was one of the founders of the Carmel Calvinistic Methodist Church at Abertillery, she had laid many foundation stones in connection with the various churches and was one of the most successful business women in the district. She left Abertillery to live at Maesycwmmer in 1896, she came back to visit her son Mr S. N. Jones in February 1903, fell ill and sadly passed away on Monday March 16th 1903.

Mrs Jane Jones nee Hughes, the first Postmistress at Abertillery in 1848 was the daughter of Mr David Hughes of Six Bells, Abertillery. She was the sister of Rev Dr Nathan D. Hughes who emigrated to the U.S.A. and was the foremost Baptist Minister in America. Mr Nathan D. Hughes had a son Mr David C. Hughes, whose son Mr Charles Evan Hughes became a very successful U.S. politician.

Mr Charles Evan Hughes 1862-1948 was born at Glen Falls, New York in 1862, son of the Welsh immigrant Mr David C. Hughes and Mrs Mary Hughes nee Connelly, a sister of the State Senator Mr Henry C. Connelly. Mr Charles Evan Hughes became a lawyer, statesman and politician. On the 6th November 1906 he defeated Mr William Randolph Hearst to become the Governor of New York and in 1916 he ran against Mr Woodrow Wilson in the U.S.A. presidential elections, being defeated on this occasion by the more experienced candidate.

Mrs Jane Jones’ son was Samuel Nathan Jones, J.P and councillor. Mr S. N. Jones also became a county councillor had a grocery and provisions business and premises close to the Arcade Abertillery. Mr Jones grocery shop was on the corner of the Arcade and in Commercial Street. It was originally a grocers and post office, which was transferred there after the closure of the office at Pond House. Mr Jones was responsible for the construction of the Arcade in the late 1890s. Mr Jones had a daughter Alla Jones, she later married Mr David Rocyn Jones the collieries doctor.

Abertillery Street Names.
The 1880 map featured shows the original names of some of the streets in the area of the Carmel Chapel. At this time this area was the heart of the town.