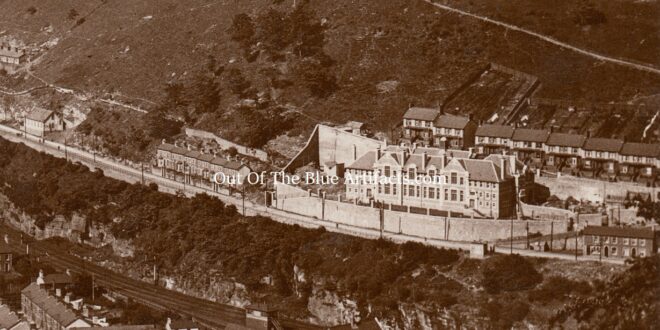 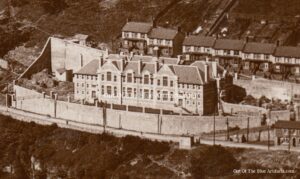 Tyr Graig School – Llanhilleth.
In 1909, after the decision to construct a new school at Llanhilleth a competition was held by the committee of the educational department for the best design of a school building. Mr John Bain F.R.I.S.A., architect to the Monmouthshire County Council Education Committee was appointed assessor. Mr Bain chose the design of Messrs Speir & Bevan, architects of Cardiff. The contract was stated as being £13,468.

Mr D. Lewis and Brynawel Estate.
On Friday 27th of May 1910, the South Wales Gazette reported that the school (as seen in the center of the main featured image above) was planned to be built on land owned by Mr D. Lewis on the Brynawel Estate and that the bills of quantities were in the hands of the contractors. The building was to be constructed of red brick with Portland stone facings and would be capable of holding 430 mixed and 330 infant pupils.

The Clerk of Works.
Mr J. H. Blackwell of Abertillery was the clerk of works.

The Contractor and Architect.
Mr D. W. Davies was the contractor and Messrs Speir and Bevan were the architects.

Description of the Building.
The upper floor contained the mixed department with eight classrooms and an assembly hall. The lower floor was the infants’ school, five classrooms and a room for babies and a central hall. There were covered playgrounds either end of the school and the whole building provided with electric lighting. The contract was £13,468 of which, it was stated that £5,000 was expended on the retaining walls and foundations for the playground.