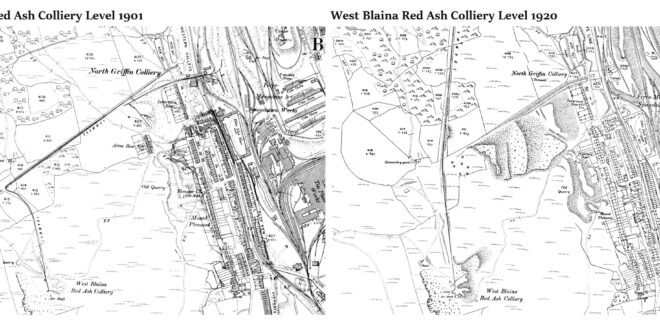 West Blaina Red Ash Level.
This coal level was situated on the side of the Arael Mountain above West Side Blaina, close to the Llanerch-y-Pant Farm.

Mr R. C. Banks.
The West Blaina Red Ash Level was opened in 1887 by Mr R. C. Banks. The tramway incline came from the level entrance down the mountain passing close to Alma Row and Inkerman Row and on into the North Griffin Colliery sidings for transportation (as seen in the map image of 1901). 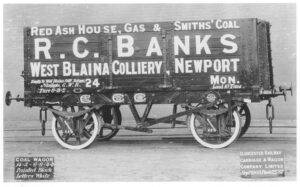 When the North Griffin Colliery closed in April 1907 the tramway incline from the West Blaina Red Ash Coal Level was diverted down through the Trostre area north of the level and into the Coalbrookvale Colliery site to utilise their sidings (as seen in the later map image from 1920).

In the 1920’s Mr Banks was still the owner, Mr Samuel Hollister of the Laurels, Blaina was the manager and Mr Frederick Gay was under-manager.

N.C.B.
In 1947 the West Blaina Red Ash Level was taken over by the National Coal Board.

The Closure.
In March 1948 it was reported that the West Blaina Red Ash Level would close after 61 years of coal production. The N.C.B. said the reason for its closure was that it became uneconomical to run. It was stated that 150 men worked at the level. The men would be absorbed into other collieries as follows – Men from Brynmawr and Nantyglo would go to Blaenavon Colliery and men from Blaina would go to the Llanhilleth or Newbridge Collieries.

Points of interest – During the North Griffin Colliery’s lifetime it had tipped waste on the side of the mountain behind the houses at West Side, over time the West Blaina Colliery added to the waste tip, as a consequence of this manmade build-up along with a natural land movement the area became unstable, many years later in 1916 the waste tip slipped and demolished Alma Row (as seen on the maps above).

In October 1937 it was reported that the mountainside waste tip was still moving and was threatening other houses in the area i.e., Palmers Row and Lamb Row.