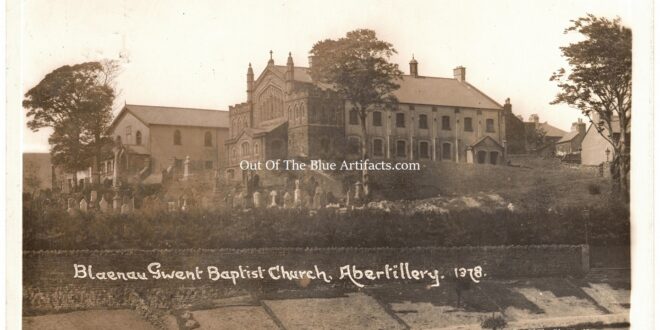 Blaenau Gwent Baptist Church.
In 1715 the first Blaenau Gwent Chapel was constructed, members at this point numbered between 80 to 90. In 1839 the chapel was re-built at a cost of £500. In 1880 the chapel was again enlarged. In 1885 increased accommodation to the chapel was added and a larger schoolroom was erected. Towards the end of 1895 the chapel had been completely rebuilt and enlarged and it was reported that a magnificent organ was installed in the building.

Link to – The History of the Blaenau Gwent Baptist Movement

In 1901 even more alterations costing about £300 were carried out, though with the 1895 rebuild and recent alterations the chapel was still fairly small for a fast growing population and the construction of a much larger church (as seen in the featured images above) was planned.

The Construction of the New Church 1905.
On Tuesday 30th April 1905 following the revival in the church, members decided to have another much larger church erected adjacent to the current building. (There is a consensus that the difference between a chapel and a church is – A chapel is a small place for Christian worship that may be attached to a schoolroom, a church is a much larger place of worship which is detached from any other building). No time was wasted and a “Ways and Means Committee”, representative of the various branches of chapel activity was set up to consider the whole question. The pastor Rev T. Towy Evans was chairman, Mr G. Gunter was secretary and Mr W. Jones was treasurer. The idea was approved and it was decided to ask Architect Mr Neander Gasenius Lewis, a member, to prepare plans for the proposed new church.

Monday 22nd May 1905 the building work for the new addition to the church began.

The Contractor and Architect.
The contractor was Messrs Linton Bros Ltd of Newport, the cost was estimated to be about £4,200. The architect was Mr Gasenius Lewis F.I.A.S. The ground work had been done voluntary by the members of the chapel.

On Monday 10th July 1905 the ceremony of the laying of the Foundation Stones took place. There were too many stone layers and observers to write in this file. If anyone wants information on any particular person for family records I can provide names of any individuals.

The New Church opening.
On Sunday 13th May 1906 the new church was officially opened. It was stated that the new building would accommodate 1,200 people.

Description of the Building.
The building was of Gothic design, the front elevation was faced with pitched-faced shoddies and the whole of the dressings, windows, steps etc were of grey Forest of Dean stone. The chief features externally were seven light tracery windows with turrets right and left rising forty-five feet above ground level. Access were by means of four entrances into lobbies. The internal measurements of the church was 66′ feet 3″ inches by 51′ feet 4″ inches. It was stated that the new building would accommodate 1,200 people. The interior woodwork was of pitch pine and the roof partly open and boarded.

The grave diggers cabin was placed at the lowest level with direct access to the grave yard. Within this cabin were the heating chambers.

The Later Years.
In the 1980’s the church was deemed unfit for purpose as it was reported it suffered from a type of wood rot. The church, old chapel and schoolroom buildings were demolished and a new much smaller church was built. The new church was erected closer to the road and is built on the exact site as the original chapel that was built way back in the early 1700’s. The site of the 1906 church building is now occupied by Corban Court, a housing complex.