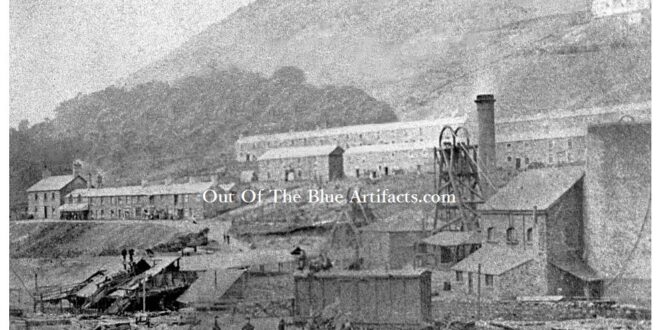 All coal from the Tyr Nicholas Colliery, Cwmtillery, was transported down the valley to the main tram line behind the Bush Inn by pack-mules.

The following details are as close as I can get to being accurate as during the various sinking and altering of the layout of the colliery the 3 shafts were re-numbered many times.

No 1 shaft (upcast) sunk to the elled coal seam at 130 yards deep. Shaft diameter 7 feet. (originally No1). This would become the upcast shaft by 1875 with 2 ventilation furnaces at pit bottom.

Mr John Russell Esq.
In 1847 Mr John Russell Esq a colliery proprietor of Risca, a business partner of Messrs Thomas and James Brown, who had formed Russell & Browns Iron Company at Blaina in 1832 though had left the partnership in 1840, purchased the colliery from Mr Thomas Brown. In order for him to expand the colliery put out for tenders to have a dram line built up the Tillery Valley. All the coal would then be transported down the valley in drams hauled by horses.

The Company Shop.
In 1861 the Tyr Nicholas Colliery had a company shop, it was owned by the owner of the colliery Mr John Russell, the weigher was Mr Edward Carpenter.

South Wales Colliery Company.
In 1864 the South Wales Collieries Company was formed to purchased Tyr Nicholas Colliery, Cwmtillery from Mr John Russell. It was said that the company was formed under the advice of Mr Thomas Brown, who was in negotiations with Mr Crawshay Bailey in purchasing the collieries back from Mr Russell. It was reported that Mr John Russell was asking the sum of £66,000 for the Collieries. After lengthy discussions with the company, Mr John Russell sold it to them for an undisclosed amount.

To many people this seemed wrong, the truck system had a hold on the workers who could not spend the tokens anywhere else other than the company shop, which was said to have had a high cost on provisions compared to other local stores. Though this was debated in a later case where a few local people objected to the practise and it was argued over in the High Court. Mr Lawrence Heyworth defended the truck system by stating he had seen many a hardship in Cwmtillery where workers wives could not afford to feed themselves or their children as their husbands were spending their wages in the pub.

Mr Lawrence Heyworth wanted the wives to have some security and have the tokens to spend on themselves and children. Not every employer felt the same as at the same time Messrs T. P. & D. Price of the Tillery Penybont Colliery and Mr John Conway of the Tin Works, Abertillery publicly announced they were to pay their employees in coin of the realm. The latter as early as the 1850’s even offering his workforce free train fares once a month for them to shop at Newport or Bristol.

The Powder Magazine.
Mr George Collingwood was the shop keeper of the truck shop, he was running it for the company and being paid a wage of £60 per year plus 10% for goods sold. Mr James Harding was the company cashier, Mr George Collingwood also held the license to keep and sell gunpowder with a maximum of 1 ton to be held in the colliery powder magazine at one time.

In 1875 the South Wales Colliery, Cwmtillery was linked to the newly sunk Rose Heyworth Colliery in the neighbouring valley for ventilation purposes. A main drivage between the two collieries was driven by Mr Joseph Wallace the general manager and a Mr William Adams, a mining engineer of Cardiff. The Rose Heyworth shaft was the downcast and Cwmtillery No3 shaft was the upcast.

N.C.B.
In 1947 the collieries of Great Britain were taken over by the National Coal Board.

In 1977 Abertillery New Mine, Rose Heyworth and Cwmtillery Sections were linked to (Blaenserchan Colliery).

Points of interest….. In the featured image can be seen the original South Wales Inn (far left) also featured on the old maps as being situated at the entrance to the colliery with a row of cottages containing a shop. The 3 shafts are in the image, the 2 winding shafts with headgear and the 3 shaft for ventilation (far right) with a wide chimney stack. In an early report this stack was lower and in line with the roof of the winding house though examinations in connection with ventilation problems it was proved that the wind blowing across the roof of the winding house was causing a buffering effect and interfering with the constant flow of air rising from the furnace ventilation shaft. In consequence to this effect the company was ordered to rise the stack well above the roof of the winding house to prevent this occurring.