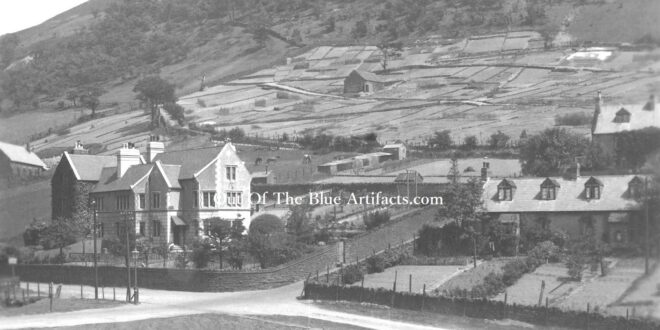 Lake Villa Cwmtillery – Colliery Managers House.
Prior to the mid 1880’s the various managers for the Cwmtillery and Rose Heyworth Collieries combine lived in their own houses, though in the late 1880’s the Messrs J. Lancaster Company built the Lake Villa, two-houses in one building to house the general manager and the company cashier etc for Messrs J. Lancaster Co Collieries.

The Cwmtillery Colliery originally had three shafts during the ownership of Mr Thomas Brown and Mr John Russell and the South Wales Colliery Company. It had two winding shafts and one ventilation shaft. The general managers were in charge of the two shafts or pits and the whole colliery along with the various under-managers in charge of each shaft and pit.  After the new sinking at Rose Heyworth Colliery by the South Wales Company in 1874-75 the general manager of Cwmtillery Colliery also had the responsibility of that new colliery. This practice remained until the 1920’s when the general management was split and each colliery had its own individual general manager.

The early Cwmtillery Colliery managers are hard to locate, some names include – Mr John Carpenter 1850’s, Mr John Jones in the 1860’s with a short period during the 1870’s in between Mr Joseph Wallace’s two periods there.

Mr Wallace came back to Cwmtillery in the early 1870’s and became the general manager of the Cwmtillery Colliery once again. At this time, he opened his own brickworks at East Side, Cwmtillery and produced his own “Wallace” bricks. He later worked alongside Mr William Adams C.E. Cardiff, helped sink Rose Heyworth Colliery in 1874-75 and drove a ventilation drivage between the two collieries under the Mynydd James.

Mr Joseph Wallace was chairman of the Work & Win Committee (as seen in the image above) during the 1870’s, went on to become the first chairman of the Abertillery Local Board, later known as the District Council, was Guardian of the Poor, was on the Aberystruth School Board, the Overseer of the Poor, a director of the Starr-Bowkett Building Society, the chairman of the Penybont Ratepayers Association, on the board of the Licensed Victuallers Association, was the ruling councillor of the local Primrose League and was the Justice of the Peace for Monmouthshire. 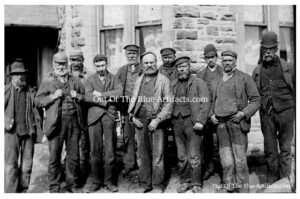 The Building of Lake Villa Cwmtillery.
Soon after Messrs Lancaster Speir & Co took over the lease of the Cwmtillery and Rose Heyworth Collieries the new company built the Lake Villa’s and in 1889 their new manager Mr Daniel Lewis and his family moved into the building, the other house connected was for the cashier of the company. As (seen opposite) are a group of miners outside Lake Villas, Cwmtillery.

Mr Daniel Lewis.
In 1888 the Messrs J. Lancaster Co took over the South Wales Colliery Company’s collieries and I believe Mr Wallace retired from his management role at this time. The new company built the Lake Villa’s and in 1889 their new manager Mr Daniel Lewis and his family moved into the building, the other house connected was for the cashier of the company. In March 1889 the keeper Mrs Clark advertised for a general servant in a local newspaper.

Following is a Link to – Mr Daniel Lewis.

In July 1889 it was announced that Mr Lewis’s son Enoch Lewis had passed his examinations and was accepted into Cambridge University at 16 years old. In 1894 Mr Enoch H. Lewis entered Balliol College Oxford University after being there for only 3 days he returned home to Cwmtillery with ill health and sadly died in April 1894 at just 20 years of age.

In 1894 the Messrs J. Lancaster Company intended to build a new reading room at Cwmtillery and all tenders were to be sent to Mr E. H. Thomas, surveyor to the company addressed to the Lake Villa’s, Cwmtillery.

The Death of Mr Joseph Wallace.
In 1899 Mr Joseph Wallace sadly passed away. Mr Wallace was held in such high esteem by all those involved with him that it was a great devastation to Cwmtillery and the retired director of the South Wales Colliery Co Mr Lawrence Heyworth wrote an extended letter of sympathy to the Wallace family which they had published in the local newspaper.

In 1901 Mr Daniel Lewis was still the general manager and the cashier at this time was Mr William Young Hobkirk, Mr Hobkirk was also the vice-chairman of the Bedwellty Board of Guardians.

Mr Hobkirk’s son Mr W. Hobkirk had passed his examinations in the Pharmaceutical Society, he had been a young apprentice to Mr T. H. Prichard (Chemists) Abertillery but had left to live in London upon passing his exams.

In May 1917 Mrs Sarah Hobkirk, wife of William Hobkirk sadly passed away at Lake Villa’s, Cwmtillery aged 56 years, she was buried at Blaenau Gwent. Mr William Young Hobkirk retired to 19 Balmoral Road, Newport and passed away on Friday 5th of December 1924, he was transported back to Abertillery and buried in the Blaenau Gwent Cemetery.

Mr Thomas Jenkin Williams.
After the retirement of Mr Daniel Lewis in about 1904, Mr T. J. Williams became the general manager of the Cwmtillery Collieries and moved into Lake Villa. Mr Thomas Jenkin Williams was born in 1866, was on many committees and boards in the Blaina area including the Board of the Chamber of Trade in 1892. He later became involved with the mining interests of the Messrs J. Lancaster Company and became general manager of the Cwmtillery and Rose Heyworth collieries. He was in that post until 1916 when at this time he gave up his post to Mr B. P. Thomas and became a mining agent for the Lancaster Co. Mr Thomas Jenkin Williams removed to Blaina House, Cwmcelyn, Blaina. Upon retirement he moved to Holly Cottage, Abertillery Road, Blaina and sadly died in January 1927.

Mr B. P. Thomas.
Mr Thomas was initially an official at Cwmtillery Colliery, the son of Mr W. Thomas, Oakhill, Aberdare, agent to Lancaster Co. He took over as the general manager of the collieries in 1916 and moved into Lake Villas at Cwmtillery.

On 1st June 1922 Mrs Elizabeth Thomas wife of Mr B. P. Thomas sadly died at just 38 years of age, she was the daughter of Mrs Lewis landlady of the Woodland Inn, Cwmtillery and granddaughter of Mr Joseph Wallace late general manager of the collieries. They were married in St Pauls Church, Cwmtillery in September 1905. After the death of his wife Mr Thomas moved out of the area and relinquished his post as manager, a party was held at the Station Hotel, Abertillery to honour his 20-year association with the Cwmtillery Collieries. He was presented with a 140-piece canteen of cutlery inscribed – “To Mr B. P. Thomas by the officials and staff of Rose Heyworth and Cwmtillery Collieries on his relinquishing the position as manager, dated February 28th 1923”.

Mr Harold Simpson.
Mr Harold Simpson was the general manager from the mid 1920’s. Mr Simpson held the post of manager to the Cwmtillery Collieries only, as at this time, Mr Ivor Warfield M.E. had become the manager of Rose Heyworth Colliery in December 1922. It seems that during this time the management of the two collieries were split.

In 1930 Mr Simpson left his post as manager of Cwmtillery Colliery and became an agent for the Lancaster Group.

In 1926 Mr & Mrs Arthur Hall, chief engineer to the Lancaster Co lived at Lake Villa, Cwmtillery. I believe the keeper at this time was a Mrs Cornford.

Mr Ivor Warfield was only at the colliery as manager for a short while he became a very popular and well respected official, though he was taken ill and sadly died in January 1938 at just 55 years of age.

Mr J. R. Jones.
Mr Jones took over the management of the Cwmtillery Collieries after the death of Mr Ivor Warfield.

Mr R. Watkins.
Mr Ron Watkins was on the 1945 management lists as being in charge of the Cwmtillery Collieries at this time.

The National Coal Board.
In 1947 the N.C.B. took over control of the collieries. The individual managers of Cwmtillery Colliery still resided at the Lake Villas until the 1960’s.

In the 1970’s the properties were offered for sale to the occupants, later both became privately-owned.

Points of Interest – The image featuring a group of miners outside Lake Villa’s, Cwmtillery was a set of two photographs showing the same gang of men in different poses. They are not identified but may have been a safety team or such. 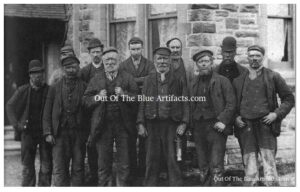 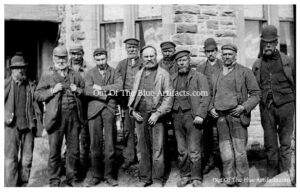