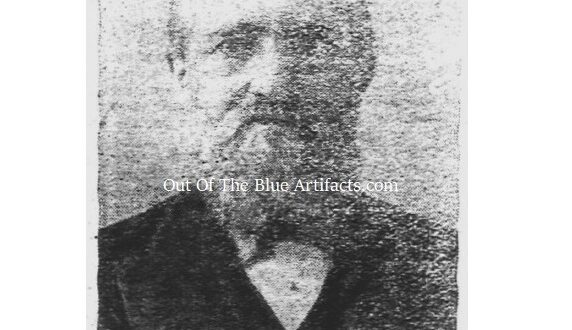 Mr Titus Phillips First Marriage and Family.
Mr Titus Phillips first wife was Miss Margaret Vaughan, they married in 1861, Miss Vaughan was the daughter of Mr Watkin Vaughan, manager of the Nantyglo and Blaina Collieries. The family lived at Church House, Abertillery. Church House was on the corner of Church Street and High Street, Abertillery. His shop and home was where Eileen Jenkins florist and the old premises of Mr Tony Welch’ dental surgery is today.

Mr Titus Phillips was deacon of the church and was number 5 on the Blaenau Gwent Baptist Church ledger in 1885.

Link to – The History of the Blaenau Gwent Baptist Church.

Mr Titus Phillips and his wife Margaret Phillips had five children – four sons and a daughter, as follows – 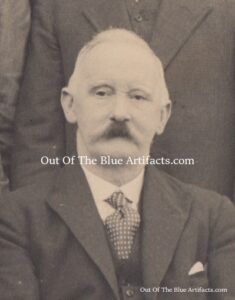 Mr Arthur Phillips.
The youngest son was Mr Arthur Phillips of 16 George Street, Blaenau Gwent, an ironmonger, draper and general furnisher with his own business in Church Street, Abertillery.

Mr Titus Phillips had a brother, in some reports was known as Mr M. A. Phillips and in others Mr John F. Phillips, who had his own business as clothier at Tonypandy, South Wales. During the strike of 1910 it was stated he had his shop premises looted by the strikers, his whole stock was cleared out.

Mr Titus Phillips was in business as a grocer and baker in the corner shop on the junction of Carmel Street and Commercial Street, Abertillery. He later built up a second business and moved to the corner of High Street, Abertillery. Mr Titus Phillips was very successful businessman, owned property and worked hard in the advancement of the town. His son J. Emlyn Phillips stayed at Church House and continued a grocery and bakery business there.

Mr Phillips was also connected with the Baptist Movement at Blaenau Gwent Church, Abertillery, was a Sunday School teacher, secretary to the Monmouthshire Baptist Association and was a founder of the Sunday School Union of which he was its secretary until 1884 when his son Mr J. E. Phillips took over. Mr Titus Phillips was also on the Aberystruth School Board and in the 1890’s was the treasurer of the Technical Instruction Committee.

Mr Titus Phillips Second Marriage.
In 1883 Mr Phillips married Miss Rasalama Williams, the daughter of Mr John Williams of the Onllwyn Ironworks, Glamorgan. They married in 1883. Mrs Rasalama Phillips was one of the first lady governors at the Intermediate County School, Abertillery.

The Post Office.
Upon the retirement of Mrs Jane Jones, postmistress at Abertillery in 1883, Mr Titus Phillips was appointed sub-postmaster of Abertillery and operated the post office facilities from his shop at Commercial Street, Abertillery.

In March 1893 the Abertillery Local Board special committee had a meeting with Mr Titus Phillips with the intention of leasing or buying the Local Board Offices which they were partially occupying. Mr Phillips stated he would be willing to rent the office building at £50 per year on a 48 year lease, or to sell the building outright at a £1,000 with a ground rent at £4 per annum. A month later the Abertillery Local Board agreed to rent the board offices with the power to purchase after 5 years under the terms offered by Mr Phillips at the time. Mr Titus Phillips also owned property on Chapel Street, Abertillery, he sold one of his premises close to the Abertillery Fire Brigade Station to the brigade for them to use as a call centre.

The Liberal Connection.
The Phillips family were staunch Liberals and Mr J. Emlyn Phillips and his brother Mr Arthur Phillips were members of the Liberal Club, Abertillery (as seen written on the members ledger left) member numbers 57 & 60 respectively in the original ledger of 1902. Mr J. Emlyn Phillips was a large shareholder with twenty shares, his brother Arthur had four shares in the club (as seen above).

In 1902 Mr Titus Phillips, now living at Newport planned to have a new large premises built on Bush Hill, Abertillery, opposite the Bush Hotel. After its construction he rented the building out to the Post Office Company as their main postal office at Abertillery, this building later became the Cottonwood Cafe.

In November 1907 it was announced in the South Wales Gazette that Rev Walter Vaughan Phillips (son of Titus) had become a minister at Hathern, Leicester.

In December 1911 it was reported that Master Norman Phillips (son of Mr J. Emlyn Phillips) sadly passed away at 14 years of age. Master Phillips had been suffering with heart problems.

In July 1924, Mr J. Roy Phillips, son of J. Emlyn Phillips passed his law degree, he had attained the required standards to compete for honours. It stated he had been articled with his uncle Mr Edward Lewis at Cardiff.

The Retirement of Mr J. Emlyn Phillips.
On Monday 26th June 1933 a presentation was held at the Blaenau Gwent Baptist Church in honour of Mr and Mrs J. Emlyn Phillips who were leaving Abertillery to reside at London. At this time Mr Phillips was the oldest male member and deacon of the church. It was stated that Mr Titus Phillips, his father had been one of the longest reigning members of Blaenau Gwent Church and was only equalled by his son Mr J. Emlyn Phillips, as in 1891 was member number 46. Mrs Mary Phillips was also connected to the church and was a treasurer of the Zenana Women’s Missionary Society. Mr and Mrs Phillips were presented with a wireless set and an umbrella.

Mr Emlyn Phillips made a speech in which he recalled how “When as a boy I could not speak Welsh yet was taken to Blaenau Gwent and taught the language there by Mr David Llewellyn”,  he went on to say “My brother and I were baptised in the open air when snow was on the ground”. Mr Emlyn Phillips at this time was a teacher at Cheltenham, he said he “Believed his father had been architect to most of the church buildings at Blaenau Gwent, there was always a Phillips name on the members register”. Whilst he and now his brother were leaving the area, he said, “Through his brothers son, Mr Emrys Phillips, the Phillips name would remain for many years on the books of Blaenau Gwent Church”. Although Mr J. Emlyn Phillips was leaving the area in 1895 he said “I will always have a warm corner in my heart for Blaenau Gwent Church”.

Mr and Mrs J. E. Phillips responded and Mr Phillips said “If any of us needed a reminder, which he was sure they never would, the kindness from the church at Blaenau Gwent would never be blotted out of our memories”. “As long as he and his wife lived they would cherish the esteem they were held in by that church, for which they had the deepest affection”.

Points of Interest – An interesting fact was mentioned at the presentation at the Blaenau Gwent Baptist Church in 1933, Mr Tom Jones recalled how Mr Phillips business and family home was at the corner of Church Street and High Street, Abertillery, he stated their house was known as Church House! Mr Titus Phillips shop and home was where Eileen Jenkins florist and the old premises of Mr Tony Welch’ dental surgery is today.