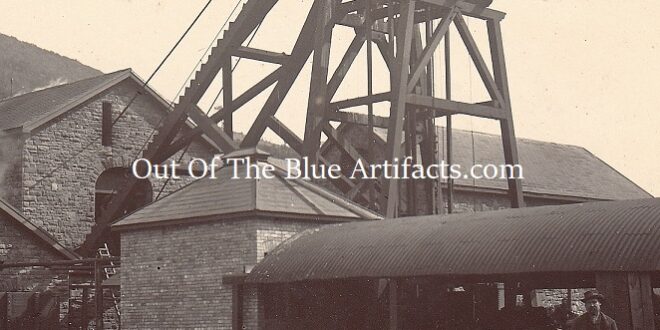 Rose Heyworth Colliery Headgear.
In March 1875, during the sinking procedure at the Rose Heyworth Colliery, tenders (as seen left) were invited for the construction of the Pithead Framework the head-frame. A typical framework at this time was a pitch-pine wooden headgear with flat winding rope (as seen in the main featured image above) and rope guides to guide the cage up and down the shaft.

The First Winding Engine Malfunction.
In February 1901 as the men were coming up the pit at the end of the day shift, as the cage was about 30′ feet from the surface the winding engine regulator valve broke, six men were stuck in the shaft and had to be rescued by means of a ladder.

Mr John Collins, Pit Sinker.
In Nov 1904, Mr John Collins, a pit sinker aged 32, died as he fell down the shaft while
he and a team of sinkers were deepening the shaft to a lower level. He had descended the pit to the landing and must have forgotten to drop the bridge to get off the cage, he fell to his death.

Rope Sliders.
In October 1907, five miners were caught sliding down the guide ropes through the shaft and were fined 20s. shillings each.

The Second Winding Engine Malfunction.
In July 1908, work was carried out on the winding engine and one of the repairers had inadvertently reversed the levers. The men who were to ascend the shaft assembled on pit bottom, as the winder-man attempted to drop the cage and to raise the other, the levers that had been reversed pulled the cage up into the head-frame with such force that the rope snapped, the cage fell down the shaft causing serious damage to the rope guides and pit-bottom. This damage was so extensive it took a week to put right.

The Modernisation of the Headgear Framework.
The wooden framework was later altered to the iron lattice type.

Mr Francis Arthur Mytton.
On the 20th July 1925, Mr Francis Arthur Mytton aged 18 died as he alighted the cage at pit-bottom, the start of his shift. Wood fell down the shaft and struck Mr Mytton. Mr Mytton lived at 8 Prince Street, Nantyglo. At this time the old wooden byatts in the shaft were being changed to new iron ones, at this time the shaft was being reconstructed and rail guides were installed at the colliery.

The N.C.B. Mobile Winder.
In the 1980’s there was an official N.C.B. file produced for the use of the mobile winder in the case of any accident or breakdown of the collieries fixed-winders. It was compiled by the N.C.B for the purpose of cataloguing the details of each shaft in the collieries of South Wales that was open in the early to late 1980’s. The booklet contains 27 collieries – each having 3 to 4 different inspection dates per colliery – 3 pages of report results and recommendations per colliery.

The mobile winder was affixed to an N.C.B. lorry and was housed at various locations throughout the coalfield in preparation for any potential breakdowns in the collieries fixed winders. The mobile winder and its operatives could get to any colliery, set up the winder and rescue occupants who may be stuck in a cage in the shaft of said colliery. The rescue pod, called the “Bomb” could access the trapped miners from above or below in the case of double-deck cages.

Following is a Link to – Mobile Winder File Details.

The Headgear Appearance in Later Years.
In the 1980’s the Rose Heyworth Colliery headgear framework was painted a two-tone blue colour with the wheel spoke ends painted white.