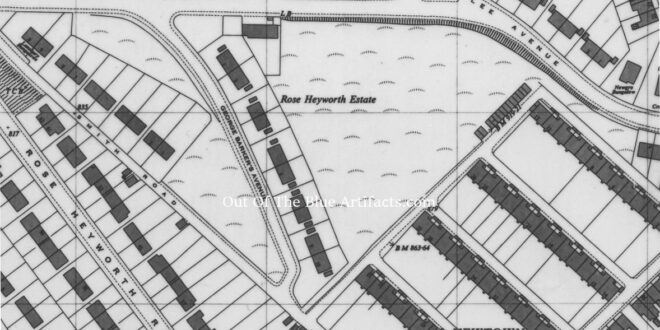 Rose Heyworth Tenants Club History 1962 – 2008.
The Beginning.
On Saturday 15th April 1961 the tenants at Rose Heyworth Housing Estate organised themselves into an association called the Rose Heyworth Tenants Association. Mr Clarence Lloyd was their first chairman. The residents wanted a community centre come welfare hall built at the estate and through door-to-door collections and fund raising activities they raised enough money to have a hall constructed. Originally intended for children of all ages and their parents and families to gather for entertainment, though it was later suggested by the association to have a bar to sell alcohol.

The Intended Site.
On Monday 26th June 1961 representatives of the Abertillery Council inspected a site at Rose Heyworth where the Rose Heyworth Tenants Association (Welfare) wants to place their community centre. The surveyor Mr R. H. Eke reported the plans for the building had been received and the site was between the Rose Heyworth Estate and Newtown Cottages, Blaenau Gwent Rows, I believe this piece of land was gifted to the association for the use of a hall.

The Intended Sale of Alcohol and License.
In November 1961 it was reported in the South Wales Gazette that the Rose Heyworth Tenants Association had applied to open a licensed club and sell alcohol at the proposed community centre and social club at the estate. Councillor Brinley Evans was against the application supported by Rev C. J. Thomas who stated it would inhibit youth work at the community centre. Councillor W. R. John said the council agreed for such a similar club to be built at Sofrydd Estate and suggested the council meet with representatives of the Rose Heyworth Tenants Association, seconded by Councillor J. J. Owen.

The License Granted.
In December 1961 the council granted permission for a bar selling alcohol to be installed at the community centre on condition that it could not be accessed from the clubroom or main hall. The community centre at this time was still to be constructed.

The Teenagers Committee.
In March 1962 the members of the Rose Heyworth Tenants Association decided to hand over the organisation of the children’s and teenagers future activities at the welfare hall to a committee of fifteen-year-olds. There had been a meeting of the association at which the young people were asked to express their views on local amenities for the youth. In order to allow the children to have a greater say and to show what they could achieve it was agreed to make them responsible for games, dances and other activities to be held at the centre.

Steward and Stewardess.
In May 1962 advertisements were placed in the paper for a steward and stewardess at the Rose Heyworth Club when it was completed in June 1962, all applications had to be sent into the secretary – Mr Sid Griffiths, 14 Lawrence Avenue, Rose Heyworth, Abertillery.

The Community Hall Building.
Sometime in June 1962 the Rose Heyworth Community Centre had been built and completed.
(More information to come).

The Official Opening.
On Saturday 27th October 1962 the Rose Heyworth Tenants Community Hall, Rose Heyworth Tenants Association Club was officially opened. Even though the community centre and bar had been operational since the previous September it was reported as being officially opened five-weeks later. The original building was approximately 60′ feet by 40′ feet, the function room being only about 40′ foot square with the lounge being about 20′ feet wide.

The Enlargement of the Club.
Sometime in the mid 1960 the club was enlarged to make the concert room larger. A downstairs games rooms were added, and a Canadian Maple parquet sprung flooring was laid in the concert room. This flooring was made up of strips of the highest quality wood which was 2″ inches wide, 1″ inch thick by 3′ foot long, laid in a parallel staggered pattern. The size of the club at this time was approximately 100′ feet long and 40′ foot wide.

Mr Tom Jones.
In the mid to late 1970’s Mr Tom Jones became the steward of the club. During this time the club had a pool table and a juke-box installed downstairs in the games rooms. The 3 month period from May to July 1975 the pool table took £215.00 the juke-box takings were £80.00 and the fruit machine took £376.00.

Mr Mel Hughes.
In the same period Mr Mel Hughes was the steward of the club, also an a temporary basis.

The Sale of the Club.
In the late 1990’s the club the club finances were at a breaking point, the debt that was outstanding on the 1990 reconstruction along with a declining membership and lack of custom the committee had no option but to close the premises. In 1999 the club was taken by the brewery and was put up for auction, the club was sold at auction to Messrs J. Howells and G. Edwards.

Messrs John Howells and Gary Edwards.
In 1999 Mr John Howells Mr Gary Edwards purchased the old Rose Heyworth Tenants Association Club. They both completely renovated it, held many theme and tribute concerts, it became the home for the local Gun Club throughout the winter months who constructed a temporary shooting range in the bowling alley and later the concert room and it was also the venue for odd boxing exhibition under the auspices of the Heads of the Valley Boxing Association.

John and Gary made it a complete success, they ran it as a pub and renamed it “The Rose Heyworth”, though the sign writers miss-spelt its name and the main illuminated sign on the southern pine-end of the club read “Rose Hayworth”.

Mr Mal Williams.
In about 2002 John Howells and Gary Edwards sold the Rose Heyworth to Mr Mal Williams of Cwm, Ebbw Vale. Mal Williams kept the interest in the pub and made major alterations downstairs by opening out the rooms and installed a snooker table and a pool table. Mal Williams also established a Rose Heyworth Sports Committee, the committee, the members of which paid into, controlled the various finances of the dart teams, pool teams and the indoor bowls league, raised money from raffles and subscriptions etc, though this amalgamation was deemed unacceptable with many members of the sports committee falling out, later the sports committee disbanded and the various teams went self financing.

Towards the mid 2000’s the Rose Heyworth lost many customers, it was once a popular venue for indoor boot-sales and weekly auctions, parties and weddings etc, though the bookings were becoming few and far between and last going of only a handful of regulars were keeping the place ticking over. In 2008 the premises were running at a loss and once again put up for sale.

The Closure of the Rose Heyworth.
In 2008 the Rose Heyworth closed and was sold to the Welsh Housing Association. It was demolished a year later and there were plans to erect nine houses on its site. A series of bore holes were driven to test the land for stability though the plans to build houses upon the site were put on hold. To this date nothing has ever been built on the site.

Points of Interest – The name of Rose Heyworth was originally the name of Mrs Rose Heyworth the colliery owners wife who gave her name to the colliery, later the estate and club amongst other places took her name. The name was intended as being split i.e. Rose Heyworth as in her name, though it was later corrupted and joined together as one name i.e. Roseheyworth, there is no continuity as most institutions and individuals over the years wrote it, or referred to it in its both forms. I strongly believe that it should be written as “Rose Heyworth” out of respect of her name as originally intended.

The following is a Link to – Mrs Rosina (Rose) Heyworth.