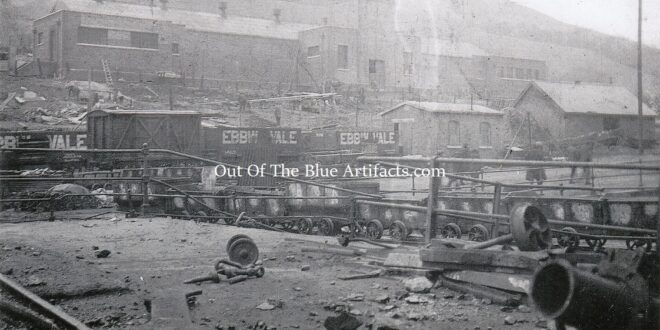 The Pithead Baths Proposal.
In March 1929 a proposal was presented to the workers at the Rose Heyworth Colliery to have a pithead baths built for the benefit of the coal miners.

In July 1929 a ballot was held to see if the workmen really wanted a pithead baths to be built in the first place and to put forward costs and contributions to be paid by the men. The Welfare Fund Committee had recommended a charge of 1s. shilling per man. The result of the ballot was 354 men in favour, 297 men against with 17 spoilt votes.

The Ebbw Vale Company who leased the colliery from Messrs J. Lancaster & Co went ahead and built the pithead baths on the back of the small majority of the “in favour” votes. 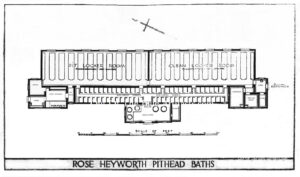 Later the guests were conveyed in motor buses and cars to Rose Heyworth Colliery for the opening ceremony. Mr W. H. Leigh Chairman of the Management Committee presided and was supported on the platform by Sir John Beynon; Sir Arthur Lowes Dickinson and members of the Management Committee and Mr Opton Purnell Secretary of the Western Valley Miners Council. Among those present were Alderman W. J. Saddler JP. Miners Agent; Alderman W. Dunn, Blaina: The proceedings were watched by a large crowd. After the various speeches Mr S. Day Vice Chairman of the Management Committee made a presentation to Sir John Beynon of a Silver Inkstand in commemoration of a great day in the history of Rose Heyworth Colliery, the first colliery in the Western Valley’s to be blessed with a Pithead Baths.

The Contractors and Architect.
The contractors were Messrs W. Symonds & Sons of Cardiff. Plans were prepared by Mr J. H. Forshaw M.A., A.R.I.B.A., of the Miners Welfare Committee and the work was carried out under the supervision of his assistant Mr W. H. Traylor, L.H.I.B.A. The baths were constructed at a cost of £15,000.

The Engineers and Clerk of Works.
The clerk of the works was Mr T. N. Carter. The Heating Engineers were the Grant Engineering Co of Cardiff and the Electrical Engineers were Messrs A. & G. Arnold and Sons of Newport. It was the first pithead baths to be built in the Western Valley’s District.

At this time there were fifty-four such baths being contemplated and only five completed with Rose Heyworth Colliery Pithead Baths being one of those five. 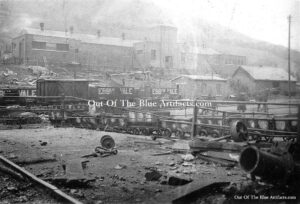 Description of the Building.
The building was of the most modern type, built with red brick and fitted with shower baths. It had fifty-eight bath cubicles, 924 clean clothes lockers and 924 dirty lockers, It was heated by hot air. There was accommodation for cleaning and greasing pit boots, drinking water filling taps, toilets and a first aid room.

The Later Years.
The Rose Heyworth Colliery sadly closed on the 20th December 1985, a few months later the pithead baths was demolished along with all the other buildings at the site. The shaft and drift was filled in and sealed off and the whole area cleared, levelled and made ready for the main road the A467 to be laid up through the valley.

Notes of Interest –
The idea of pithead baths in the United Kingdom had been mentioned as early as 1889, though they were not really seen to be taken seriously until just before the Great War, though they were in use in Germany in 1891.

In October 1913 the matter received consideration of the Miners Federation and the miners at the Arrael Griffin Colliery, Six Bells had a meeting where the miners agent Mr W Brace chaired and tried to convince the workers that a pithead baths would really be in their interest and that the Section 77 of the Coal Mines Act of 1911 enacts that if a majority of the men at a colliery wanted a baths the owners would have to make satisfactory provisions and build one, the cost would be shared, half by the owners and half by the men at a rate of no more than 1 farthing a day – One and a half pence per week. A ballot would be held at a later date but Mr Brace hoped the men would agree and vote yes.

In June 1914 a report declared and reaffirmed the Section 77 of the Coal Mines Act of 1911, collieries exempt from this section of the act are those employing 100 men or less, those collieries whose leases terminate within 10 years or which are likely to be worked out within that time. The cost of maintenance must be shared and the management of the baths is entrusted to a committee of six, three representing the coal owners and three the colliers.

Descriptive Example… What follows is a descriptive account of a typical pithead baths prior to the introduction of cabinet lockers – A miner proceeds to work in his ordinary suit, his working clothes are in the bath house, suspended by means of a chain passing over a pair of pulley’s near the roof of the building. To prevent his clothes being stolen each man is provided with a padlock and key. On entering the house the miner unlocks his padlock, his chain ascends and his clothes descends. He makes his necessary change in a private compartment, hangs his clothes to the hook at the end of the chain and hoists them to the roof and locks his padlock…. When he reaches the surface at the end of his shift he takes down his ordinary clothes and passes into a bathing cabinet – this is a compartment 5’ft 6″ins long by 3’ft 6″ins wide and 6’ft high.

A sink connecting to a drain occupies the centre of the floor and overhead at a height of 7’ft-8’ft is the spray – a length of hot water pipe connected with the mains and terminating in a rose 4″ins-6″ins in diameter. The spray is provided with a valve manipulated by either pulling a cord, pressing a lever or turning a wheel. When this valve is opened the bather receives a shower bath. He lathers himself with a small bar of soap provided by the coal company, 1 bar per man per day. After his bath he dries himself with a towel provided to him one per week or whenever deemed necessary. He then proceeds to the dry section of the cabinet and finishes dressing.

The pithead baths campaign had every confidence that even larger percentages would be recorded in South Wales once the system came into general use. The need for the moment is for an active propaganda to be carried on in it’s favour and was desirable that the Miners Federation should initiate the educational campaign so that its members may be in the position to take the necessary steps to put Section 77 into full operation.

This campaign seemed to come to a halt as war broke out in 1914 and was re-started in 1920, urged on by many women’s organisations, after the war there were many stoppages and discontent in the coalfield and I can’t find out much about its progress until 1931 when Rose Heyworth Colliery leased by the Ebbw Vale Company opened the first pithead baths in the Western Valleys. At this time there were fifty-four such baths being contemplated and only five completed with Rose Heyworth being one of those five.