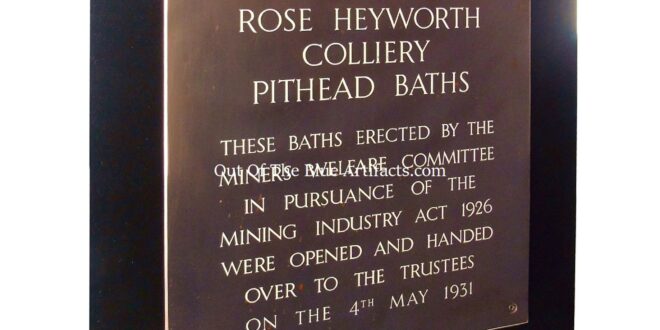 The Rose Heyworth Colliery Pithead Baths – Opening Ceremonial Plaque.
The original opening ceremonial Rose Heyworth Colliery Pithead Baths plaque. Made from a copper alloy with white lettering inlay. Size of the plaque is 18″ x 24″ inches. Size with the mount is 24″ x 30″ inches. Weight of the plaque is 9kgs, with mount it is 13.7kgs.

The Contractor and Architect.
The contractor was Messrs W. Symonds & Sons of Cardiff. Plans were prepared by Mr J. H. Forshaw M.A., A.R.I.B.A. of the Miners Welfare Committee and the work was carried out under the supervision of his assistant Mr W. H. Traylor, L.H.I.B.A. The baths were built at a cost of £15,000 equivalent to £931,500.00 in todays money.

The Engineers and Clerk of Works.
The clerk of the works was Mr T. N. Carter, the heating engineers were the Grant Engineering Co of Cardiff and the electrical engineers were Messrs A. & G. Arnold and Sons of Newport. The Rose Heyworth Pithead Baths was the first pithead baths to be built in the Western Valleys District. 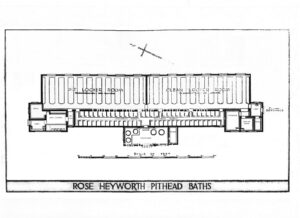 Later the guests were conveyed in motor buses and cars to Rose Heyworth Colliery for the opening ceremony. Mr W. H. Leigh the chairman of the management committee presided and was supported on the platform by Sir John Beynon; Sir Arthur Lowes Dickinson and members of the management committee and Mr Opton Purnell the secretary of the Western Valley Miners Council. Among those present were Alderman W. J. Saddler J.P. miners agent; Alderman W. Dunn of Blaina: The proceedings were watched by a large crowd. After the various speeches Mr S. Day the vice-chairman of the management committee made a presentation to Sir John Beynon of a silver inkstand in commemoration of a great day in the history of Rose Heyworth Colliery, the first colliery in the Western Valley’s to be blessed with a pithead baths.

At this time there were fifty-four such baths being contemplated and only five completed with Rose Heyworth Colliery Pithead Baths being one of those five.

Description of the Building.
The building was the most modern type, built with red brick and fitted with shower baths. It had fifty-eight bath cubicles, 924 clean clothes lockers and 924 dirty lockers, It was heated by hot air.

There was accommodation for cleaning and greasing pit boots, drinking water filling taps, toilets and a first aid room. The image (above) shows the Rose Heyworth Pithead Baths with the bottom Arael View housing estate in the background in 1985.