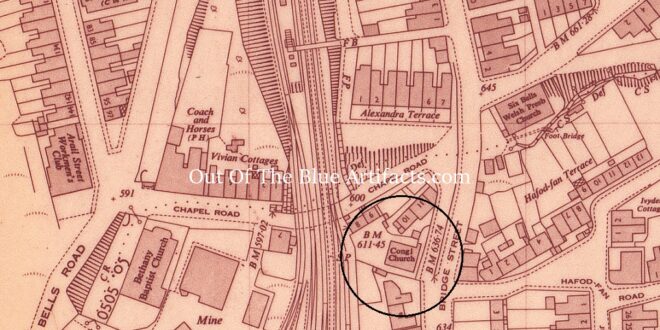 The Six Bells Congregational Church – The Rehoboth.
From the 1890’s, the congregationalists of Six Bells, Abertillery had held their religious meetings at the Hafod Van Reading Room, Six Bells. Over the years to follow the members of the church – a mission off-shoot of the Tabernacle Church looked toward more suitable accommodation, a church of their own in which the atmosphere of public worship might be more readily developed and would be worthy of the denomination.

The Planning of the Church.
In October 1920 the members of the church had acquired a bit of land which had been an old rubbish tip between Bridge Street and Chapel Road, Six Bells, Abertillery. In the same month they purchased from Mountain Ash, Glamorganshire the bare skeleton of an old iron corrugated building, the cost of the structure including a few pew’s and chairs was £180 including the expense of its removal from Mountain Ash. A few other items of church furniture was given by the St Mellons Church, Cardiff.

During October 1921 some work to the excavations for the foundations was carried out by members of the church, many of whom were miners who had been out of work owing to the miners strike, though on the resumption of work at the collieries the ground work on the new church had be be put on hold.

In March 1921 further industrial trouble (The Miners Lock-Out) in the area provided another opportunity to complete the work on the new church and to make the necessary alterations to the building. The structure was later lined with asbestos and match boarding. The necessary work to the church, ground and structural work was done by volunteers, members of the church under the shadow of the said bitter miners strike in this year.

Link to – 1921 Miners Lock-Out at the Vivian Colliery, Abertillery. 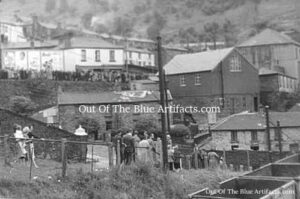 The Church Building.
In July 1921 the new church (as seen to the right in the image left) had been constructed and was complete, it measured 36′ feet long by 30′ feet wide and 20′ feet high and provided seating accommodation for 250 worshippers. There were three windows on one side, four on the opposite side with one window at each end. Amongst the alterations made was the removal of the staircase to a more convenient position, the addition of a porch, a new rostrum, the laying of linoleum and a complete repainting of the whole building. Gas was installed for lighting purposes and a hot water system was planned to be put in place in the near future.

The officers of the Six Bells Congregational Church were as follows – Mr Charles Down (Secretary); Mr John Evans (Treasurer): The deacons were as follows – Mr T. Tossell; Mr T. O. Parry and Mr Isaac Evans: The church was in the pastorate of Rev J. Marks Evans, pastor of the Tabernacle Church, Abertillery.

The Opening Ceremony.
On Wednesday 13th July 1921 the dedication services in connection with the new Congregational Church, Six Bells, Abertillery, took place. The opening ceremony was performed by councillor Edmunds of Rhiwderin, chairman of the Monmouthshire Congregational Union, who dedicated the building to the service of God. The chief speakers at the service were as follows – Councillor Edmunds; Rev T. Tudor of Ebbw Vale; Mr W. M. Taylor J.P., of Brynmawr; Mr David Jones J.P., of Ebbw Vale, ex-chairman of the Monmouthshire Congregational Union and Rev W. Morgan of Abersychan: Also present were – Mr C. Downs (Secretary of the Church); Rev T. Richards of Newport; Rev E. Walrond-Skinner (Secretary of the Union); Rev T. J. Thomas of Abertillery and Rev R. Mon. Evans of Rhiwderin:

After the dedication service tea was provided at the Hafod Van Reading Room, Rev T. Richards of Newport preached on the subject of building of the alter by the children of Israel and the writing of the law. Mr Harry Harding rendered a solo entitled “Hold Thou My Hand” with Mr L. Evans accompanist on the piano. The collections during the day amounted to £22. 10s. 0d equivalent to £956,00 in today’s money.

First Sunday Service.
On Sunday 17th July 1921 the first Sunday Service took place, Rev J. Marks Evans preached sermons in the morning, afternoon and evening. solo’s were sung by Master Gwynne Cheedy in the afternoon and evening and a solo by Master Sydney Symonds concluded the service. The organist was Mr Clifford Griffiths and the collection during the day raised a total of £10. 3s. 4d. equivalent to £432,00 in today’s money.

In October 1930 the South Wales Gazette reported on one of the most important experiments in the direction of co-operation in church work ever attempted in Monmouthshire. It stated four Congregational Churches in Abertillery – Tabernacle, Brynteg (Blaenau Gwent), Rehoboth (Six Bells) and the Welsh Gellicrug had been considered by the Western Valley Congregational Board whereby the Brynteg, Six Bells and Gellicrug would form a joint pastorate, each church would maintain its distinctive character as before but would combine with the others to support a pastor. The Tabernacle would be the mother church. The Rev David Walters of Bristol the moderator for the South Wales and Monmouthshire district gave his approval and the next step was to appoint a bilingual pastor, in view of the fact that he would have to officiate at Gellicrug in the Welsh language.

On Friday 27th November 1936 a meeting of the Abertillery Free Church Council was held at the Rehoboth Congregational Church, Six Bells, Abertillery. Rev W. Davies presided, supported by Mr W. A. Thomas (Secretary). At this meeting Mr F. Russell and Mr J. Tippins attended as a deputation from the Abertillery Council of Action to give a report on the Abertillery to London March. Mr Tippins reported on the progress of the march and the various towns visited along the route, Bristol, Slough, Swindon and Reading. Mr Russell concluded the report with an appeal for support from the Free Church Council.

On Wednesday 28th July 1937 a Garden Party in connection with the Rehoboth Congregational Church, Six Bells, Abertillery was held at the Cwm Farm Field, Abertillery. The opening ceremony was performed by Mr Stanley Thomas, a deacon of the Tabernacle Church and Mrs Wilfred Evans took the chair supported by Mrs J. Tossell and Mrs C. Thomas. A duet was sung by Mrs Griffiths and Mrs Jenkins, accompanied by Mrs J. Lane. Button-holes were presented to the deacons by Miss Connie Wiltshire. After tea Misses Wheeler and Mrs T. Powell sang a number of duets.

In August 1937 the Rehoboth Congregational Church, Six Bells, Abertillery was closed for renovations and alterations, it was stated the work was in the hands of the Bon Marche Limited, Abertillery. During the renovations the services and meetings were to be held at the Hafod Van Reading Room, Six Bells.

The Rehoboth Congregational Church, Six Bells, Abertillery was active until at least the 1960’s, it featured on the official council map of 1963 (as seen in the featured image above). The old cottages that were on the land close to the church were later demolished along with the church and the area cleared. The site is now occupied by the original Six Bells Colliery Disaster Memorial which was erected in 1995.

Notes of Interest – Reports on the establishing of the Congregational Church at Six Bells showed that Mr Thomas Tossell, Mrs H. Powell and Mr T. O. Parry were founding members of the cause.