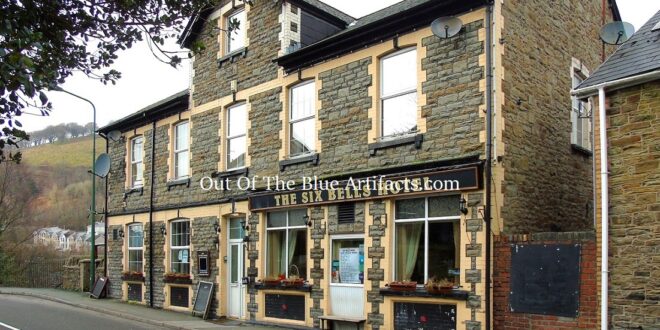 Six Bells Hotel.
In August 1892 Mr Phillip Meredith, landlord of the old Six Bells Inn applied to the General Annual Licensing Meeting to transfer his licence from the old Six Bells Inn to a new premises which was about to be erected upon the new road. This new public house was to be known as the Six Bells Hotel and was planned to be built on the site of two cottages owned by Mr John McCarthy and Mr John Williams, on land owned by trustees of the late Mr John Lewis of Gilfach, Six Bells.

The Licensing Application and Approval.
On Saturday 24th September 1892 a Licensing Session Meeting was held at Pontypool. The magistrates who attended were as follows – Col Byrde (Chairman); Dr A. Davies; Mr E. J. Phillips; Mr E. Jones and Mr W. P. James: At this meeting the building of the New Hotel was approved, Mr L. E. Webb, solicitor, representing Mr Phillip Meredith (Six Bells Ale House) appeared at the licensing application in respect of the removal of this license to a new house at Six Bells.

New Plans Submitted.
The meeting was given notice of amended plans of a new building instead of the proposed alterations of 2 cottages as previously suggested. (It seems that it was originally proposed to convert the two cottages owned by Mr McCarthy and Williams as stated, though now it was planned to build a completely new building). Mr J. McBean of Abertillery, submitted the new plans of the proposed new hotel to be erected, the dimensions of which were as follows – A kitchen, scullery, and cellars on the ground floor, commercial room, smoking room, bar parlour and bar on the first floor, club room, billiard room and four bedrooms on the second floor with two bedrooms on the roof floor. There was also accommodation for a coach house and stabling. Mr W. H. V. Bythway acting on behalf of the trustees of the late Mr John Lewis consented to the application.

The proposed Six Bells Hotel would be in the Pontypool Licensing District and had different opening and closing hours as that from the Abertillery District.

In April 1893 tenders were invited from builders and contractors which had to be returned to Mr Thomas Phillips of Maes-y-cnew Farm near Crumlin. The tender of Mr Noel Bagley (as seen below) contractor of Abertillery was accepted.

The Laying of the Foundation Stones.
On Tuesday 27th June 1893 the foundation stone was laid at the new Six Bells Hotel. Mr Lewis laid the stone.

The Contractor and Architect.
Mr Noel Bagley was the contractor. Mr James McBean the surveyor to the Abertillery Local Board was the architect.

The Formal Opening of the New Six Bells Hotel.
On Monday 19th February 1894 the new Six Bells Hotel was formally opened, a company of over thirty sat down for a meal served in the billiard room of the hotel. Mr J. Samuel was voted to the chair and the usual toasts were given, songs were sung by the following – Mr Ben Evans; Mr Stephen Winmill; Mr C. Hands, Mr Jenkin Jones and Mr Tom Jones:

The Pride of the Valley’s Lodge.
On Saturday evening 10th November 1894, members of the “Pride of the Valley’s” Lodge of Oddfellows held their annual supper at the Six Bells Hotel. It was stated over eighty members attended, Mr Thomas Price presided and some of the members mentioned in the report were as follows – Mr S. Winmill; Mr John Edwards; Mr Bullen; Mr D. Evans; Mr Williams and the Vice-Chairman Mr Jones.

In February 1898 it was reported in the South Wales Gazette that Mr J. H. Jones became landlord of the Royal Hotel in Torquay. Mr Jones had previously been the landlord of the Six Bells Hotel.

In November 1913 the Arael Vivian Lodge of the R.A.O.B. (G.L.E.) held a gathering at the Six Bells Hotel. Some of the names who attended were as follows – Knight Lovell; Knight Phillips and Knight Rees: Primo’s D. Rees; Boycott; Collins; Lapham and Vincent: Bros Harding and David: The Lodge held subsequent meetings at the Six Bells Hotel thereafter on regular occasions.

In August 1916 the landlord of the Six Bells Hotel, Mr William John Yendoll was taken into the Arael Vivian Lodge No360 R.A.O.B. (G.L.E.) to the Third Degree.

On Friday 7th November 1924 a meeting was held at the Six Bells Hotel with the intention of forming a Six Bells Bowls Club. A chairman and secretary was appointed to represent the club at the annual meetings of the Monmouthshire and Welsh Bowling Association, a committee of seven was chosen and a large number of members were enlisted.

In August 1933 the Six Bells Hotel was put up to let, applications to Messrs Webb’s Aberbeeg Ltd, the Brewery Aberbeeg.

The Abertillery and District Dart League Formation.
In January 1937 a general meeting was held at the Six Bells Hotel with the intention to form a Dart League for the Abertillery area. Names of some of the original team members were as follows – Mr B. Humphries; Mr T. Blackmore; Mr H. Mills; Mr E. Richards; Mr B. Silcox; Mr O. Wilcox; Mr T. Bayliss; Mr W. Webber and Mr J. Burge.

The Six Bells Hotel is still open as a public house.

Below is a link to the early history of the Old Six Bells Inn.

Notes of Interest – Mr Noel Bagley, Building Contractor and Architect. Born in Wing, Oakham in the County of Rutland. He came to Abertillery in the late 1880s and lived at 39 Oak Street Abertillery, lodging with Mr John Winmill and family.

Mr Noel Bagley constructed the Vivian Colliery railway sidings and was part of the engineering group involved in the extensive alterations to the Abertillery railway re-routing scheme and new station and the Bush Hill Bridge. He was responsible for the building of the new Six Bells Hotel, the new Station Hotel, the Six Bells Colliery Screens and Washery Building, the Bon Marche and many other buildings and he also constructed the Cwmtillery Reservoir.

He later built his home “Rutland House” in Oak Street in the early 1900’s and more than probably named it after his home County of Rutland.

On Friday 15th March 1907 Mr Noel Bagley sadly passed away after suffering from Pnuemonia at his home at Abertillery.

Not long after his death, his wife Amy Emmaline and children moved from Abertillery to live with her mother Priscilla Johnson at 9 Providential Place, Newtown, Peterborough, who also at this time was a widow.