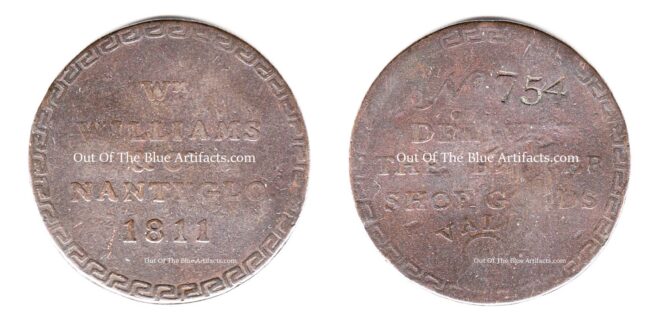 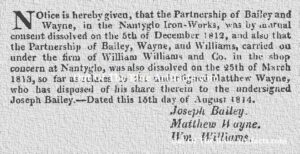 Their partnership was known as William Williams & Co and was a company shop business when the Nantyglo Ironworks were in its infancy. The partnership of Bailey and Wayne was dissolved in December 1812, the partnership of Bailey, Wayne and Williams carried on under the firm of William Williams and Co (as seen in the clipping above) from the London Gazette 1814, though was also dissolved in March 1813 and Mr Matthew Wayne disposed of his share therein to Mr Joseph Bailey (as seen in the same clipping) from August 1814.

The Company Token is 27mm in diameter. Made from Copper.
It has the wording “Wm Williams & Co Nantyglo 1811” on the obverse with “No.754 Deliver the Bearer Shop Goods Value 1d” on the reverse.