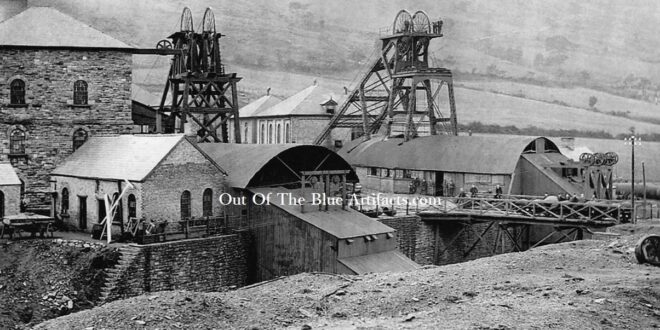 On Friday 16th November 1883 the Manchester Courier and Lancashire General Advertiser printed the following report from the directors of the Nantyglo and Blaina Ironworks Company Limited – Messrs John Lancaster & Co had completed the South Griffin Colliery and were making arrangements in relation with the forming of a railway connection with the Monmouthshire Railway Company’s Western Valley’s Lines.

This news coincided with the Blaina Furnaces Company being rebuilt and the starting of a new furnace and of the old furnaces with three hot-air stoves along with the construction of thirty-six new Coppee coke ovens. The addition of new steam hammers, engines and boilers at the Blaina Iron and Tin Plate Works. Messrs John and William Stone expending a great deal of money in making an underground railway of 1,400 yards long to extract from a valuable tract of coal and in making their own brickworks which will bring in royalties from fireclay. The improvement of farm lands and buildings, workmen’s cottages and other houses have been erected and new day schools to accommodate 1,300 children. The completion of the Blaina Public Hall and plans to build a new market-house.

Following is a Link to – Mr John Lancaster.

The Colliery Ventilation Fan.
On Saturday 6th October 1888 the ventilation fan broke down at the South Griffin Colliery No2, it was reported to have been one of the largest ventilation fans in South Wales.

The Second Pit No3 South Griffin Colliery.
The Ceremony of Cutting the Sod.
On Saturday 21st September 1888 it was reported in the South Wales Gazette that Messrs John Lancaster & Co had cut the sod for the new South Griffin Pit next to the old pit. The ceremony was presided over by Mr and Mrs John Dakers of the Woodlands, Blaina. An engine and special carriage set off from the offices of the company, having onboard Messrs Dakers; Messrs J. P. D. Williams; Mr and Mrs Wilkins; Mr and Mrs Bowen; Messrs Parsons; Swinden; Enyon; Martin; Drew; Lewis and many more: The train was met with Dr and Mrs Soper; Mrs Morgan and Mr Walsh amid the noise of railway charges and fire-crackers:

The cutting of the sod commenced at five-o-clock, the visitors crowded around what was called a “Magic ring” of green turf which had been selected as the spot to operate in. Mr Dakers called upon the Rector to offer prayers for the success of the undertaking after which Mr J. P. D. Williams presented Mrs Dakers with a ceremonial spade to perform the digging of the new shaft. A photograph was taken of the group and the party then moved into a nearby out-building attached to the farm in which they had tea.

The Sinking.
On Monday 13th October 1890 the Western Mail Newspaper reported that the previous Saturday 11th October a dinner was given at the Queens Hotel, Blaina by Messrs John Lancaster & Co Ltd to celebrate the completion of sinking operations and coal winning at their No3 Pit at the South Griffin Colliery. The shaft was 240 yards deep equal to 720 feet.

The Aberbeeg Super Colliery.
On Saturday 4th December 1920 a new colliery undertaking went ahead by the J. Lancaster & Co at Aberbeeg, the first sod was cut by Lady Mather-Jackson J.P., O.B.E. It had been planned to sink this new colliery as early as 1918 and was in the planning procedure until 1919 but owing to the uncertainty of the financial situation at this time, it was put on hold, though as stated the opening went ahead and the first sod was cut.

The new colliery shafts would have been 20’feet in diameter and 500 yards (1,500’feet) deep and sunk to the old coal seam, it was estimated that there was 1,200 acres of coal available and the output when the pits were fully developed would have been 1,000,000 tons per year. The colliery would be electrically equipped throughout, the power being obtained from the generation station at Victoria, Ebbw Vale. There is no mention of why this colliery ceased development, what its official name was, it may have been part of the Griffin combine and numbered consecutively.

Managers at the Colliery.
The South Griffin Colliery was operational less than 40 years in coal production, during this time had only a few managers. The following are just a couple that I found in reports –

Mr Tom Jones, in 1902 Mr Jones was awarded the role of manager to all the company’s collieries. He had previously been manager at the Tillery Colliery, Abertillery.

The Colliery used as a Film Location.
In 1935 the ruins of the South Griffin Colliery was chosen as the part setting of a film called “Things To Come” adapted from a novel written by H. G. Wells.

Following is a Link to – The Story of the Film Location.

The Closure of the South Griffin.
After the 1921 miners lock-out the collieries production and sales waned and the South Griffin Colliery was closed along with the Henwain and Lower Deep Collieries. The company mothballed the closed collieries for future planning and in June 1940 mining agents and the secretaries of mines asked what would be required in the reopening of these collieries at Blaina, though at this time they questioned the capability of them being worked as of lack of manpower.

Points of Interest – Colliery Fatalities.
This list of deaths at the South Griffin Colliery, Blaina, covers most of those reported in National and Local Newspapers. This page is fluid and will be updated as more information is received.

Mr Charles Davies Selway, aged 16. Died – Wednesday 27th December 1893. Death caused by being crushed between the footboards of the workmen’s train and the platform of the South Griffin stop.

Mr Peter Ewart, aged 20. Died – Monday 4th April 1898. Death caused by burns from an accident with oil at the lamproom at the No3 colliery. The accident occurred on Wednesday 16th March while Mr Ewart was cleaning lamps and whilst disposing of the old oil from a container the fuel spilled onto him and ignited causing burns to his back and lower limbs to which he never recovered. Mr Peter Ewart lived at 17 Gladstone Street, Blaina.

1904.
Mr Albert Bertie Cowley, aged 17. Died – Friday 18th November 1904. Death caused by being crushed by a goods train while crossing the lines at the colliery on his way home from work.

Mr W. H. Jackson, aged 21. Died – Saturday 20th June 1914. Death caused by a fall of roof. Mr Jackson was a timberman’s assistant to his father, he was a member of the Blaina Lancaster Town Band, of which his father was secretary. Mr Jackson lived at Abertillery Road, Blaina.