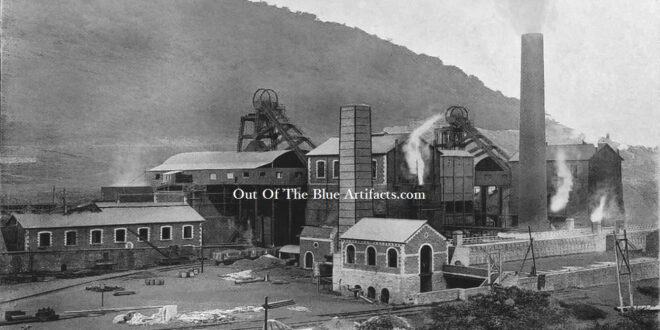 The Marine Colliery Cwm.
The sinking of this colliery began in 1889 by the Ebbw Vale Company and was originally called the Graig Fawr.

The Opening of the Colliery.
It was completed by June 3rd 1892 and was reported as being christened on this date and had been known as the Graig Fawr through henceforth be known and addressed as “The Marine Colliery”.

Mining Royalties.
The Marine Colliery was just inside the Abertillery boundary and once in full production was estimated to rise 10,000 tons per week – There were two assessments on coal, one of 6d. per ton to the district under from which it was mined and one of 2d. per ton to the district in which it was banked (brought to the surface). The Ebbw Vale Company said they would mine coal entirely in the Ebbw Vale district which was estimated at an income for the Ebbw Vale Board of £13,000 a year and Abertillery have the assessment at the lower estimate of just £4,300. Abertillery would also lose a portion of the money they had previously borrowed for that area.

Cwm Brook.
They would also lose a plentiful supply of pure water from the Cwm Brook, this Brook would become the new boundary and it would have to be shared, so Abertillery would lose half of their supply which augmented Abertillery and supplied the Aberbeeg area.

Abertillery was having problems with the sanitary conditions at the houses (owned by Mr John Stanfield) at Llandavel, they had extra expense on scavenging and rubbish collections from the area, also the responsibility of the upkeep and repairs to the roads in that district and along with the distance from Abertillery, all added to their problems.

The first report was drawn up in June 1890, after 2 years of arguing the final report to which the both sides were in agreement and also which put an end to hostilities was entered in 1892. The report mentioned that the Ebbw Vale Company would not build houses for the workers on the land at Landavel and would house the influx of miners at Ebbw Vale and Cwm and would supply a passenger train from Beaufort to the Marine Colliery for the use of the workers.

The Land at the Marine Colliery.
During research I found a story from Saturday 5th January 1889 that a few miles of the mountain land around which the Marine Colliery was sunk was originally purchased many generations ago by the present owners for the price of £1,000, a gun and a race horse. The report stated that the race horse had since broken its neck at Newmarket, the £1,000 had gone on tickets to see the Ballet Dancer Miss Marie Taglioni shake her toes in London and all that was left was the gun, that at the time of the report was still kept at a farm house, near to where the colliery was being sunk.

The Contractor and Architect.
Messrs W. Miles & Sons of Ebbw Vale were the contractors. It was stated that Mr William Miles the head of the company had previously constructed the washery at the Marine Colliery, Cwm and now his son Mr C. W. Miles had built the pithead baths.

Description of the Building.
The Marine Colliery Pithead Baths was constructed with Ebbw Vale red bricks and had an exterior of the noted Ebbw Vale russet brown facing bricks. Built on two storeys it had 1,440 clean lockers and 1,440 dirty lockers. They were constructed by the Miners Welfare Fund for the cost of £26,000.

Following is a Link to – The Marine Colliery Pithead Baths Opening Ceremonial Plaque.

The Closure of the Colliery.
In March 1989 the Marine Colliery, Cwm closed. The colliery’s both shafts were filled in, the out-buildings demolished and the site cleared.